FCL Mets OF Hector Rodriguez is now hitting .391 through his first 17 games in 2022 and is now a career a .333 career hitter through 59 professional games


I can't speak for Carrasco/Walker because I've actually never heard either publicly or "privately" who prefers whom but Scherzer/deGrom prefer Nido and Bassitt prefers McCann, the others likely have a preference (most do) but no clue.
RE: kd has my point right - also starting 2021 slow was likely
DanMetroMan : 7/6/2022 12:06 pm : link
In comment 15747976 Eric on Li said:


I can 100% understand defense being a concern but since the opening is at DH i think that gets nullified.

I think the reason they aren't calling him up is deference to JDD/Dom since they are guys who have 'paid dues', and its the first thing i disagree with that i think ultimately falls to buck. they rightfully showed accountability matters with Cano. they are being hypocritical now because the numbers post-Cano have been almost as bad and they aren't making a change.

If Vientos fails you go back to Dom/JDD. None of them should stand in the way of a good trade - but they've already been putting it out there that they aren't trading a big prospect for a hitter or reliever so realistically not sure what they are expecting to get.
Vientos
dannysection 313 : 7/6/2022 12:18 pm : link
I don't follow the minors like you all do, but it's half way through the season...is it really that dicey to give him a try?

Maybe the Mets fully intend to trade for a DH (boy, Josh Bell would be nice....and,I was hoping the Red Sox would be dead by now and JD Martinez would be available), hence the status quo with the DH position but..

At this point, I walk out of the room with other things to do at night whenever JD or Smith, (or McCann) come to the plate...."automatic out" doesn't do them justice. Dom shows some hope since his call-up, but JD (who seems like a good teammate) is on the wrong side of 30 and hasn't been able to catch up with a high heater all season. Enough with this guy....I think he may be DFA'd if and when a trade happens.

Regarding McCann, this is the trouble with bad contracts...not only do you have to pay the guy, but you (at least it seems in every sport) have to play them too, hoping you'll get some ROI...When McCann comes up with runners on and less than 2 outs, I count anything that's not a DP as a win...Nido's swing is too long, but he seems to hit a bit with RISP..

So, if Pete, Lindor, Squirrel, etc, have an off game, there are too many other dead spots to pick them up.


Nice... from the thread the day he pitched:

Let's a deal with Mauricio and smith gets him and Laureno, do you do that?


It's not recent. They have their own system where they add names as they go. He was added on 6/14.

"Six other players have moved into the 50 FV, four of whom were anticipated coming into the season and two of whom weren’t. Cubs center fielder Pete Crow-Armstrong and Braves center fielder Michael Harris II have both made swing changes. PCA made his change in the offseason and has had time to generate a meaningful sample showing that it has indeed unlocked meaningful pull-power to go with his incredible center field defense. He now ranks among the other excellent up-the-middle defenders poised to make at least one-note offensive impact, in the 40-50 overall range of the list. "
RE: RE: if this lowers the price of acquisition do you roll the dice?
Eric on Li : 7/6/2022 3:09 pm : link
In comment 15748070 KDavies said:


just saw that. i'd guess it's unlikely either of him or montas throw again before the deadline. maybe 1 "prove it" start, but honestly don't think that will change much beyond whatever the team docs think.

let's assume team docs are comfortable with the MRIs, would anyone roll the dice on Mauricio for Montas? it's a risk but i think the upside is worth it and we have the depth with scherzer/jdg getting closer to rest him for a stretch run if that's what it takes.
They have said all along 3-4 rehab starts...
Italianju : 7/6/2022 3:09 pm : link
for degrom so this seems about right.
They
DanMetroMan : 7/6/2022 3:09 pm : link
periodically remove and add names, they don't make a "new" list so their pre-season list looks very much like their in-season list until the following year. Some players are removed but usually it's a few additions/graduations. He explains it here-

"Updates will be paired with written analysis explaining why they’ve occurred. I’m averse to simply re-ordering names and announcing an update, as it feels clickbait-y to me and serves to blur the line between real expertise in this field and someone just tweeting a repackaged list of names. I realize I’m fighting an uphill battle in this regard (gestures at our broader culture), but I want to cling as tightly as possible to my priorities (rigorous, well-considered work that garners the approval of my peers and people in the baseball industry) while still giving readers what they crave as a natural byproduct of achieving that goal."

I think id rather use our assets....
Italianju : 7/6/2022 3:12 pm : link
for a bat and bullpen vs a starter. I know relying on Degrom's health, Walker and Carrasco's inconsistency, etc... is super risky, but id like to roll the dice that our starters stay healthy and use what we have to improve the lineup and bullpen. Look i know relying on Degrom is crazy, but if him and or max are hurt in the playoffs i dont think we are winning the world series with or without Frankie. I dont know if any bat/bullpen combo is worth Mauricio, but outside of Bell/Mancini i barely hear about any other impact bats.
I'm
DanMetroMan : 7/6/2022 3:13 pm : link
less high on Mauricio than some of you so it's no surprise, I would absolutely do Mauricio for Montas assuming the Mets doctors looked over the results and (like the A's doctors) didn't see structural damage. Alderson has an excellent relationship with Beane/Forst.
RE: I'm
Eric on Li : 7/6/2022 3:17 pm : link
In comment 15748108 DanMetroMan said:


Wouldn't he have close to 10 more HRs in other parks, including Citi? Presumably, a lot of those were turned to outs, so certainly that effects those numbers as well.
What about Jose Quintana
Sammo85 : 7/6/2022 3:32 pm : link
of the Pirates as a lefty add? Watched him against Yanks last night a bit and came away impressed.


I wish it were as simple as that. But they do not take into account weather, wind gusts even etc. Jason Bay supposedly was going to be a monster at CitiField due to very similar projections.

“ The Web site hittrackeronline.com provides cutting-edge data about every home run hit in Major League contests in 2009. Included in these data are translated distances for all homers, showing how far each would go under standardized conditions of weather and circumstance.

By comparing the standard distance of each of Bay's homers to the standard dimensions of Citi Field, accounting for the part of the park to which Bay hit each and for the differences in wall height between Citi and Bay's old home (Boston's Fenway Park), we can begin to get a picture of the overall impact of his move.

This gets very involved, but in essence, it's a wash. That's right. Bay hit 15 of his round-trippers at home last season. Citi Field's much deeper dimensions (the left-field foul pole is some 25 feet farther away than is Fenway's) would suppress that total to just 10. ”

Unfortunately, Citifield represses power beyond its dimensions and the Mets have been unable to identify why. So “X homers in Citifield” based on dimensions isn’t really accurate.

“ The overall context is this: Since 2009, the Mets have posted a better home OPS than road OPS just three times. They’ve had a better slugging percentage at home than on the road just three times, none of them since 2011. The club has moved the walls in, it’s installed a humidor, and it’s thought, through different front-office regimes, about why the ballpark plays the way it does.
Citi Field is one of the things I’ve been trying to wrap my head around,” acting general manager Zack Scott said in August (before he was placed on administrative leave later in the summer while awaiting trial on a charge of driving while intoxicated). “The ballpark suppresses exit velocity, which is one of the weirder things I’ve ever seen. It’s not about wind or dimensions. It’s about the ball off the bat.”
Websites
DanMetroMan : 7/6/2022 3:57 pm : link
And twitter feeds like “does it dong?” are almost exclusively taking into account ballpark dimensions/wall heights.
of the "bigger name" hitters available i'd still do Cruz
Eric on Li : 7/6/2022 3:59 pm : link
i think he just has the highest upside. maybe he's done, or maybe for a few months in a better lineup he'd go back to being a monster?


Mike Elias and Sig Megdal are extremely well regarded and very smart, not saying Eppler isn’t but I’d be nervous dealing with them
cruz statcast data looks pretty good and 42 year olds generally
Eric on Li : 7/6/2022 4:07 pm : link
don't bring back massive trade hauls. would think something jose butto'ish gets it done? who knows maybe even JDD gets that done?

adding Cruz, Laureno, and Montas for Mauricio, Butto, Dom, JDD would be a massive upgrade to the 40 man. Add a vet reliever who is mostly salary dump (Minor!) and they are in good shape. 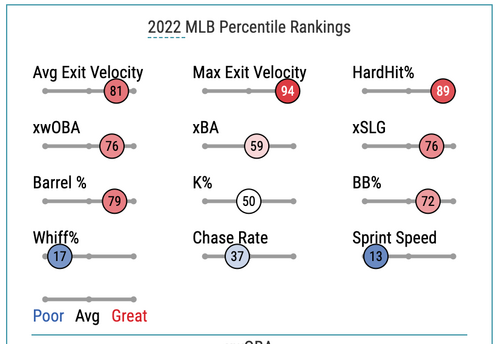 Dom has been AWFUL
Paddack needed TJ
Hosmer despite his blistering start 0.4 fWAR making 18 million per
Pagan-
Aaron Gleeman
@AaronGleeman
Emilio Pagán now has a 7.40 ERA in 41 appearances dating back to last September 1, including 14 homers allowed in 38 innings.