NFL wants flag football to be an Olympic sport


on one hand maybe there is hope for some of us becoming Olympians yet.

on the other, I always thought of flag football as football lite. why not export some modified version of 7 on 7 instead? 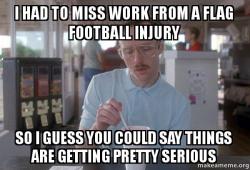 
He got a few concussions playing tackle football and soccer though a few years later. One that lasted way too long and that ended his football days.

I had a few as well, but already know you can tell that :-)


The NFL HAS more money than most countries... I think they're working on a space-base platform and lasers now.
Hard to believe the NFL thinks people are going to show up
ghost718 : 7/7/2022 12:51 pm : link
spend hundreds of dollars a week,to watch flag football.

I think the shoulder pads and uniforms will have to stick around for awhile,even if they are for show.
I played 5 or 6 games in a semi-pro* flag football league.
TC : 7/7/2022 1:21 pm : link
*Semi-pro: A pair of player/managers split the winnings from an illegal betting pool.

After finishing school and finding employment I played 5 or 6 games in a "recreational" league full of bar sponsored teams. 8-man sides, no helmets or pads just a cup, cleats and mouth guard. Two ambulances at every game.

Bloodiest, most vicious football football I'd ever seen. My final game before quitting, half my team didn't show up to play. And then I found out why as one player after another got carted off in a meat wagon. Mainly resulting from tons of elbow swapping to the head, sometimes embellished by a well placed cleat to the diaphragm or face.

I was only a sub, and as I watched from the sidelines, I began to reflect whether it was wise to continue my elected recreation before my employer supplied medical insurance kicked in. Young and stupid sometimes are synonymous, but I wasn't crazy.


Agreed. The leagues I played in were way worse than the example above.
Flag football is becoming extremely popular in youth leagues
Essex : 7/8/2022 1:12 pm : link
as alternatives to tackle football. I think more people play flag football in my neighborhood than soccer at this point and a lot of kids play soccer. I do think the sport is going to grow not as an alternative to football, but as a sport all of its own given how many young kids play it.
The Duke, Rozelle and Taglibue
Spiciest Memelord : 7/8/2022 1:55 pm : link
architected and transformed the NFL from an ignored bush league sport as popular as synchronized swimming into the greatest leading entertainment franchise in the world.

Does not seem Goodell and Vincent have that same visionary power its safe to say.
They are definitely not as savvy…
Jimmy Googs : 7/8/2022 2:15 pm : link
.
I am head coach for a girls high school flag football team
SuperRonJohnson : 7/8/2022 4:50 pm : link
here in Florida. It is one of the fastest growing girls sports in the country. I had 50 girls involved in the program. I also coach regular football. I can definitely see the continued growth of girl's flag football.