Link - ( New Window )
once Pat Bev is able to be moved
Enzo : 8/5/2022 10:04 am : link
something like this works under the cap:
Knicks get Mitchell
Utah gets Russ
Lakers get Randle (or Fournier), Beverly, and Reddish.

then of course you have to add in the picks and/or young players from the Knicks and Lakers.

Knicks get Mitchell
Jazz get Russ and Fournier
Lakers get Clarkson, Beasley, and Reddish
So in this scenario
BigBlueShock : 8/5/2022 10:21 am : link
The Knicks wouldn’t be giving up any young players? Just picks and veteran cap filler? I find that highly unlikely, but where do I sign?
I feel the same way
Jan in DC : 8/5/2022 10:21 am : link
about the Lakers. They messed up by trading for Russ. Everyone knows it was stupid. Whether the GM got strongarmed by Lebron or not, it was an awful fit from the start.

If they are getting bailed out, they better be giving up some of the draft capital in this deal. It's obvious that Ainge wants more than what's on the table from the Knicks, so if he can figure out another team to fleece in the deal while we don't up our offer, I'd be happy with that.
it's been said a million times
Enzo : 8/5/2022 10:24 am : link
but the Knicks can't get too reckless with multiple unprotected picks. Getting Mitchell obviously makes us better - but it's not like we're instantly a super team.
i dont like the lakers...
Italianju : 8/5/2022 10:28 am : link
but if this trade means we can send less back then im fine with it. Personally i dont really like trading Rose, he was so good off the bench 2 years ago. I guess if the trade allows you to keep IQ then i get it since you want to give IQ minutes, but still.

I will say if the lakers somehow turned the mess that is russ into some combo of Randle, Fournier, Rose, Bogdanovic, Clarkson, and Pbev they did quite well. That team needs depth more then another superstar (not that this version of russ is anywhere near a superstar)
RE: this also more or less
Anakim : 8/5/2022 10:28 am : link
In comment 15772341 Enzo said:

They'd do it for two reasons:

that's just the foundation of the deal for cap purposes. The picks and other young players (Obi, IQ, Grimes) is the tough part that they need to haggle over.
I've randomly wanted Malik Beasley on the Knicks
bceagle05 : 8/5/2022 10:46 am : link
for several years now, though he obviously would come with baggage. He'd be a nice option at the back-up 2 if Grimes/IQ were traded.
Now this makes more sense than the Lakers taking on Randle
Strahan91 : 8/5/2022 11:02 am : link
and Fournier. Taking on those two deals + trading a 1st would be quite a gamble in the case that LeBron leaves. I think they want the future flexibility in case they need to find a new running mate for AD.
I might be in the minority but
Carl in CT : 8/5/2022 11:03 am : link
Im calling OKC. Offering same package for SGA. (Him and Mitchell even? Thoughts?) Presti loves picks and I get something done with him. Fuck the Lakers and really fuck AINGE!!!!
RE: I might be in the minority but
Strahan91 : 8/5/2022 11:37 am : link
In comment 15772426 Carl in CT said:

I'm sure they've checked in on SGA given the Kentucky connection but I highly doubt the Thunder would move him. They have a nice young core now and he's a great fit with Giddey, Chet, etc. They have a ton of picks already in the coffers and won't be able to use them all.

I'm not sure it would mitigate the assets the Knicks have to deal though. LA has held firm on only trading 1 first round pick to move off Westbrook and I bet Utah could get a first for either Clarkson or Bojan (possibly Beverly and/or Beasley too but less sure on those guys) so I don't think it's going to reduce the ask from the Knicks.
A graphic of the deal that was speculated...
bceagle05 : 8/5/2022 2:39 pm : link 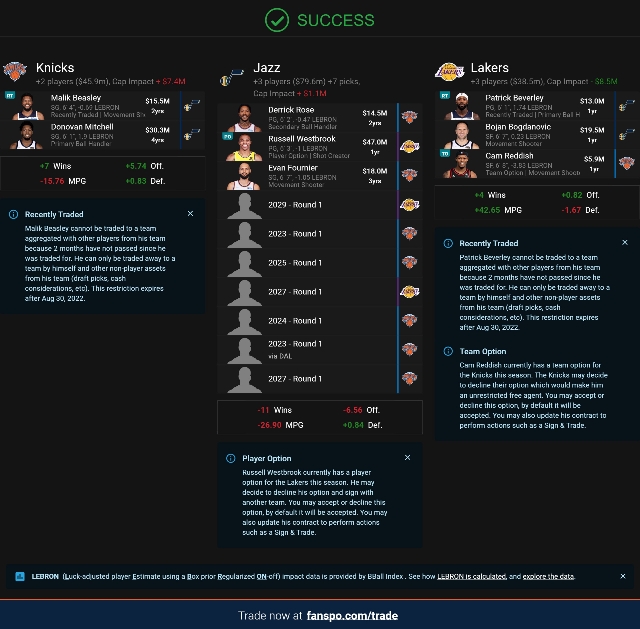 No title contender, but that's a good basketball team if Randle is engaged.
Not surprising if the Lakers want to get involved
nygiants16 : 8/5/2022 2:44 pm : link
interesting that Beasley's name came up, would make sense why they decided to revisit in spetember, then beasley can be added to deal..
RE: Not sure how realistic it is to keep all the young guys except Cam
Enzo : 8/5/2022 3:08 pm : link
In comment 15772596 bceagle05 said:

yeah - it's not realistic. But adding a guy like IQ or Grimes to the deal won't really affect the mechanics of the trade cap wise.
I find it hard to believe
Kmed6000 : 8/5/2022 3:23 pm : link
that the Knicks would only be including Cam Reddish and cap fillers to get Mitchell. If Rose does pull that off, that'd be special(assuming its not 4/5 unprotected picks).
BC I'd assume such a deal would only include 1 FRP from LA.
Strahan91 : 8/5/2022 3:38 pm : link
They've been unwilling to offer both their 1sts in any deal including BK with Kyrie and Indy with Turner + Hield
Mitchell the Latest Savior
Jeffrey : 8/5/2022 4:19 pm : link
I want the Knicks to hold onto their young players, particularly Barrett, Sims, Quickly, McBride and Grimes. I want them to hold onto the unprotected 1st round draft choices. Having two very small (by NBA standards) guards on the floor is not going to help the defense at all. This team is cursed by all the stop/starts in terms of their approach to rebuilding. If veterans have to go send Randle or Fournier. If young players have to go send Reddish or perhaps Toppin (though I still have hope for him if he can develop an outside shot).
Anyone watching the 94' Knicks vs. Bulls
larryflower37 : 8/5/2022 5:48 pm : link
Game 7 on NBA TV ?
That is the championship that got away.
That Knicks team was fun to watch.
RE: Anyone watching the 94' Knicks vs. Bulls
Mike from SI : 8/5/2022 6:22 pm : link
In comment 15772704 larryflower37 said:

The '96-'97 team was good, but I don't think we beat MJ & Chicago in the ECF. We split the regular season series, but come '96-'98...I never would have bet against MJ. I remember people taking Utah over Chicago in the '98 Finals & thinking, 'As long as Jordan is on the court, he'll will that team to the title if need be.'
Am I off in thinking that trade like these are either
CooperDash : 8/5/2022 7:04 pm : link
heavy on players OR picks…but generally not both? I mean, when the Knicks traded for Carmelo Anthony. The Knicks sent Denver a bunch of players and ONE first round pick (along with two second rounders. And Denver also sent the Knicks four other players.

Six or seven first round picks for one player should be enough to close that deal. That is a lot of draft capital to include. I understand we need to include other players for cap purposes but you have to think that Ainge is just being greedy.

That idiotic deal for Rudy Gobert really screwed up the trade marker with probably the worst possible person in Ainge.
RE: Am I off in thinking that trade like these are either
Jim in Fairfax : 8/5/2022 7:08 pm : link
In comment 15772770 CooperDash said:


Trades set markets, unfortunately, until the next trade happens. Minnesota unintentionally f***ed us. Enjoy KAT and Gobert on the court at the same time....
RE: Am I off in thinking that trade like these are either
Strahan91 : 8/5/2022 8:35 pm : link
In comment 15772770 CooperDash said:

A lot of the recent comparable deals included both young players and picks: AD, Paul George, 1st Harden deal etc
What purpose do the Lakers have
Giants73 : 8/6/2022 2:05 am : link
In this trade. They get to dump Westbrook and actually get something in return. They are adding zero value except it is the Lakers and the league is looking for some way to appease Lebron.


Their 2027 and 2029 first round picks when they might be a mess (certainly won’t have LeBron) are VERY valuable. But it’s not as if they’d be getting KD in return. They’ll be getting headcase Kyrie, mediocre Julius Randle, solid but limited Jazz role players, or young but limited Pacer role players.
RE: ...
shockeyisthebest8056 : 8/6/2022 10:02 am : link
In comment 15773168 SFGFNCGiantsFan said:


I agree although my reasoning is different. I’d rather roll forward with a young player at all 5 positions with Toppin ready to replace Julius Randle if he’s traded. This is better than depending on Julius Randle to rediscover his previous form.

Brunson, Mitchell, RJ, Obi, and Mitch Robinson will all be between 26 and 22 years old when the season begins.
It's a great position to take for the Knicks
larryflower37 : 8/6/2022 10:43 am : link
They are hyping up the value of Grimes and Danny boy looks like he won the trade if he gets Grimes.
All the while the Knicks can keep other assets.
Grimes might end up being a decent 2 but he will not be Mitchell.
Hold out on Grimes as long as possible and cut into the picks that Ainge wants.
The reports about both sides being stubborn and unwilling
CooperDash : 8/6/2022 11:03 am : link
to compromise are really annoying. Everything points to the Knicks offering multiple paths and Ainge (of course) unwilling to move off his ridiculous demands.

By all accounts, the current Knicks front office doesn't leak much of anything at all. So a lot of the leaks are likely coming from the Utah side hence why they're favorable towards them
RE: RE: The reports about both sides being stubborn and unwilling
CooperDash : 8/6/2022 11:16 am : link
In comment 15773216 Strahan91 said:


I'm a fan of Grimes,but he can't be the reason they don't make the trade. However, not both him AND Obi. If the other rumors are true & Randle will be moved, Obi becomes the starter. At the tail end of last season,when Thibs finally let him get out of the corner & play his game, Obi was great! Replace Obi with Reddish along with all the firsts & make the deal!
I don't think you can say "Grimes can't be the reason
Jan in DC : 8/6/2022 4:47 pm : link
you don't make the trade."

It's the price in its totality. Would the Knicks trade Mitchell for Grimes. Sure, absolutely. But I'm guessing that there's a pick package that is included in that and Grimes is just another assets. There's a point where it's too much and if Utah is insisting on Grimes on top of 6 picks and IQ or whatever, yea, it's too much.

Looking at one piece in a vacuum isn't looking at the full scope of the trade.


If you had read the posts above it, it was based on the package of Fournier,Grimes,Obi& picks.So no vacuum, just an observation that if Grimes was included,Obi shouldn't be,because that would suck!!!
...
SFGFNCGiantsFan : 8/6/2022 6:26 pm : link
Count me in the 'I don't wanna give up Obi' camp too. I like Grimes, but I won't be crying myself to sleep if he's dealt.