DanMetroMan : 8/8/2022 8:41 am
- Parada expected to debut this week
-Baty and Butto to Syracuse per Martino
-Only one draftee for the Mets has appeared in a game (Paul Gervase who struck out 2 over 1 perfect inning)


Ziegler pitched .2 of an inning this week after returning from biceps tendonitis (pulled due to pitches, 25 in one inning)

They play Baty 1 game per week in the OF, that was supposed to be the play for Vientos but they reversed course. I assume that plan will continue.
Speaking
DanMetroMan : 8/8/2022 9:09 am : link
to a writer, Baty's defensive issues remain pretty similar to what they were before the year. Moves well for his size but not "well" for a starting 3b so he takes some time to get moving on balls in (so this will be something they need to deal with positioning-wise), he boots some gimmes because he doesn't have the softest hands and his exchanges sometimes exhibit below average times (glove to throwing hand). This all comes from somebody who ranks him top 30 with all-star upside, so not a "hater".
RE: RE: in Binghamton
KDavies : 8/8/2022 9:12 am : link
In comment 15774476 DanMetroMan said:


Carroll must be in there as well. Chourio and de la Cruz biggest risers I'd imagine.

Metsmerized Online
@Metsmerized
·
1h
Mets are tied for the 2nd best record in the majors. 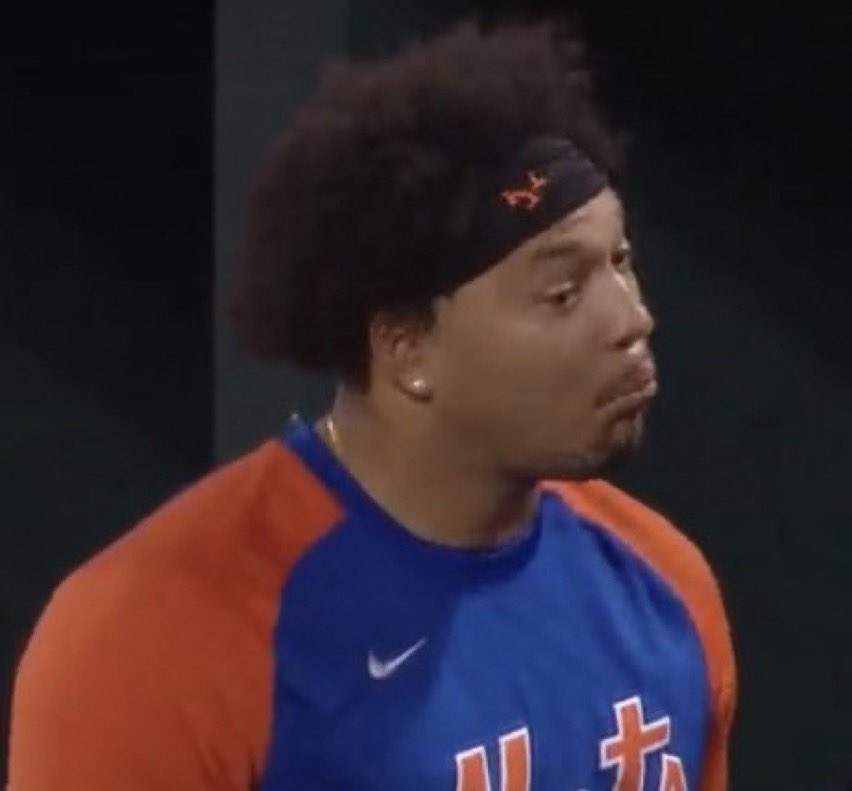 
Nice! I go way back too. I must admit to something: I turned off the TV when Gam 6 of the 86 WS was on and the Mets were down to their last out. My 9-year old brain and heart couldn't bear to see that team lose after the season they had. Boy did I learn a lesson from that, lol!

P.S. My buddy Giovanni was in the "LET'S GO METS!" video from '86 (he's the Dominican kid in glasses on the far right at the 55 second mark).


lol. I'll tell what: Gid got me two years later in Game 4of the '88 NLCS @ Shea when Scioscia hit that Home Run offa Doc cuz Dumbass Davey left him in the game too long in the 9th despite having Lights Out Randy Myers in the Bullpen. 34 years later and I still haven't recovered from that shit!
My
DanMetroMan : 8/8/2022 4:33 pm : link
Mom to this day accuses me of being a bad fan when they are down 5-6 runs late and I turn it off haha
.
DanMetroMan : 8/8/2022 5:18 pm : link
Congrats to Jeffrey Colon. Colon has been promoted to @BKCyclones. 3rd in the organization in FIP (30+ innings)
Mason McRae top 100
DanMetroMan : 8/8/2022 5:43 pm : link
13. Francisco Alvarez, C, Mets
I’m low on Alvarez relative to the population. He has a 37% Z minus O swing rate in Triple-A but has managed to run a high walk rate which is where almost all of his run production has come from. Doesn’t look sustainable. Has .195 xBA in Triple-A, but the raw power is where he’s getting most of his love as he hits the ball hard; has a 90th EV > 105 mph and a Max > 110 mph. His power is plus, he lifts with authority and could hit 25–30 HR, if he doesn’t hit for power though it’ll be a rough offensive profile. He’s an average reciever with a below-average arm, I think he’ll split time at C and 1B and sit right around a 105 wRC+ for the majority of his career with peaks around 115. It all hinges on him hitting for power.


22. Brett Baty, 3B, Mets
Baty has improved a lot in his extended time in Binghamton. His power is real and could produce upwards of 25 in the MLB. He’s making plenty of contact in the zone and has around average swing decisions. He’s improved in the field which is a big development for him as he won’t have to move over to 1B. I think he can hold his own in LF and at third. His contact quality is elite and he’s posted a Max EV above 114 mph.

64. Kevin Parada, C, Mets
Parada was 6th overall on my ’22 board. He’s a catcher in a world where we’re expecting robot umps, making his position an offensive one. But because the entire profile revolves around the offensive tools, it probably doesn’t affect him as much as his peers. His arm is below-average, and he’s a below-average receiver. Parada’s approach is aggressive, as a result he swings at a lot of good pitches, as well as some of the bad ones. The positive is that his bat-to-ball skills allow for some decision-making error, and he can get away with poor swings. His batted ball numbers are good and he’s exceptionally good at creating the ideal attack angles to match pitches in order to connect with the bottom portion of the ball. It’s a high-end offensive profile at C/1B/LF.