NFT: NHL Thread: training camp less than a week away

but less than one week training camp starts and just over a week before 1st pre-season game (I think 9/15 is the first game), looking forward to the season (even though it looks to be a massive rebuild in MTL).

some players I think (could be wrong) are still available as UFAs are PK Subban, Zach Aston-Reese, Braden Holtby, Sonny Milano, Evan Rodrigues, and more...


How is Spencer Knight still 20? lol. Seems like he's been around for 5 years.

The main one who stuck out to me as off is Jiricek. He should be or will be higher. He's awesome.

Anthony SanFilippo
@AntSanPhilly
·
14m
I've been told that @NHLFlyers center Sean Couturier has a herniated disc in his back that could cost him several months, if not the whole season. I have a story coming very shortly. @NHL.
One of those players
pjcas18 : 9/20/2022 8:43 am : link
who played on a team I hate, but I grew to respect (even with him committing a crime against Pacioretty, lol)

I don't know how voters vote. He's a 7 time AS, 1 time cup winner (and captain of the team), and 1 time Norris winner,

I don't know how that stacks up against other D in the HOF.

Sergei Zubov is in the HOF.

I remember when NSH fans thought they won the Subban for Weber trade. lol.

NHL News
@PuckReportNHL
·
1m
NEWS: PK Subban has retired from professional hockey at the age of 33.

Even still, he's 3rd from his draft class in goals (after Forsberg and Hertl), 5th in points and 3rd in games played

Complete Hockey News
@CompleteHkyNews
·
1m
The Arizona Coyotes have re-signed forward Barrett Hayton to a two-year, $3.5 million contract with an AAV of $1.75 million.
I am not a ticket stub
pjcas18 : 9/22/2022 9:30 am : link
guy or a pack rat, but....for some reason I save every business card I ever got. Don't get them as much anymore with social media and QR scans, etc. but I had thousands and I was throwing them out recently when I was cleaning out my desk and I found this in there with them.

The absolute most boring event of my life. Other than getting to see the Stanley Cup up close, I'd rather be in economics class sophomore year of college. that's how boring the draft was. 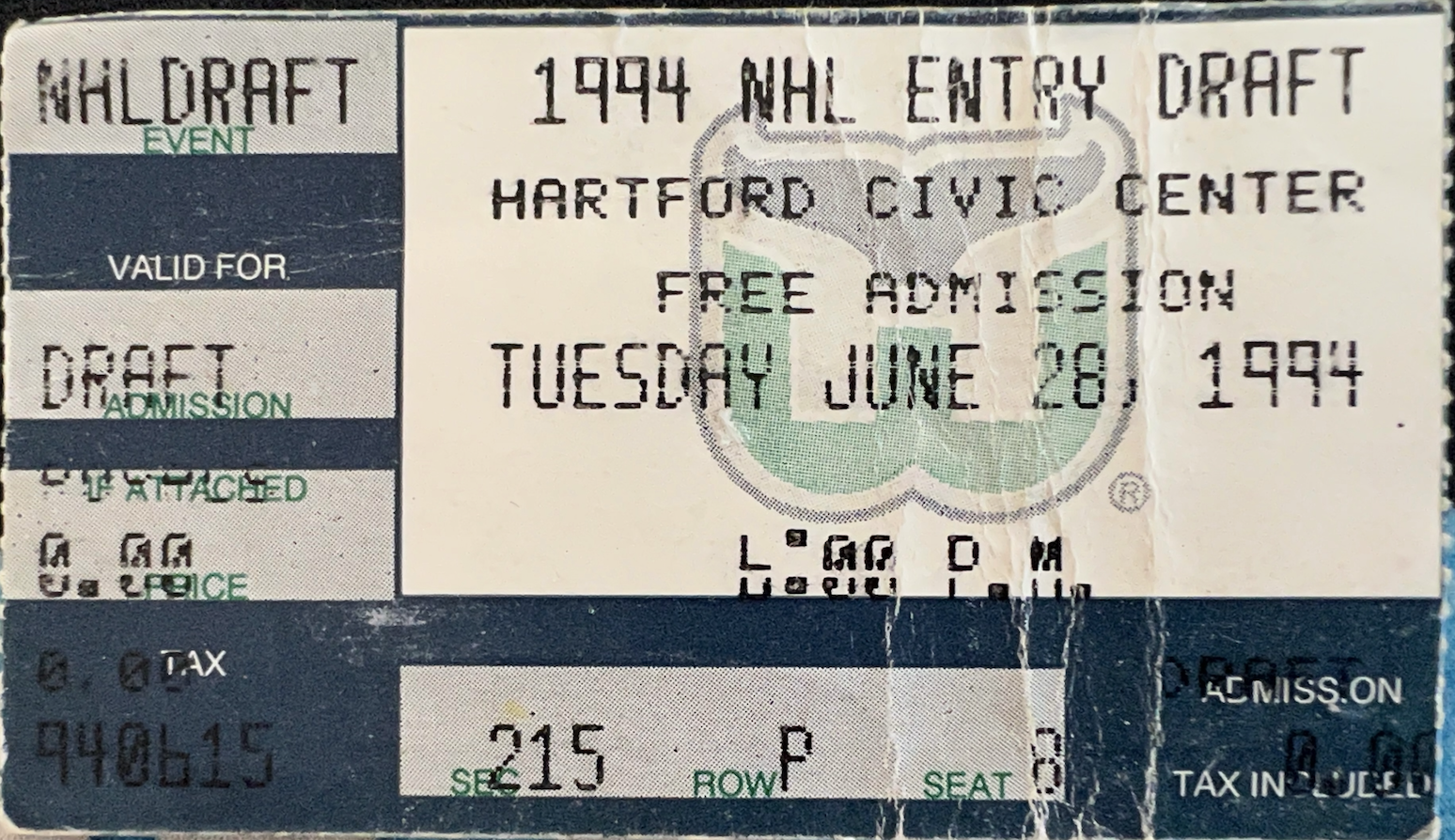 I can't imagine attending a draft. What is fun about hearing names read live?
Nothing fun about it at all
pjcas18 : 9/22/2022 9:51 am : link
I didn't know what to expect, but I didn't think it would be that dreadfully boring.

It was my first job out of college and my boss was a Whalers season ticket holder and thought he was doing me a solid by giving me his free draft tickets.

I felt obligated to go.

Only cool thing was I took my dad, and while he was equally as bored as me, we got to see the Stanley Cup.

Have been lucky enough to be around the Cup a few times
Diversify yo bonds : 9/22/2022 10:15 am : link
Nothing beats seeing it in Toronto in that cathedral / stain glass area at the Hhof. That's a really cool room. The other half that's downstairs in a mall is embarrassing.

I got to be up close in the summer of 94. My buddy's neighbor was a video assistant for the Rags and had the Cup in his backyard. A mixed blessing to be sure, but it was crazy to see it in a plain old long Island backyard.
I've seen it a few times since then
pjcas18 : 9/22/2022 10:29 am : link
once at the hockey hall of fame, once at a charity event (where I met McAvoy, Grzelcyk, Krug, Gronk and a few more Boston sports stars), once at Fenway after the Bruins won, but that first time, I could have spent hours just trying to read all the names, etc.

Truly awful. '99 is a shit show also.
I saw it in '95 when the Devils were in the finals
Stu11 : 9/22/2022 10:52 am : link
They bring it, along with all the other awards trophies and set them up for display at a location off site in each city during the finals. PJ that's a good point about the names. I'd love to see it again, because back then there were no Devil's names on it. DYOB I visited the old site for the hockey HOF in Toronto back in the 80's. I'd love to go again because from what I hear it another level from the old one. The old one was a joke. It was some tiny building with a couple of small rooms by the old Exhibition Stadium where the Jays played
1 v 1 drill with goalies?
Diversify yo bonds : 9/22/2022 12:16 pm : link
I never played organized hockey. I've watched practices and seen various battle drills. I've never seen this setup. Is this common? What is the purpose of having the goalies there?
Drill - ( New Window )
RE: 1 v 1 drill with goalies?
pjcas18 : 9/22/2022 12:21 pm : link
In comment 15827408 Diversify yo bonds said:


that's almost all we do anymore. Small area battle drills. They combine so many fundamentals the kids don't even realize all the things they are working on during the drill.

The best ones are what we call progressive, where it starts 1 on 1 but once you get control of the puck you pass to a teammate on your side and they join the battle and it becomes 2 on 1 and the rules vary but often for us you can't shoot on net until you get 3 on your side. We have so many variations of battle drills.

having goalies is important because shooting at an empty net is useless, and because of the small area goalies need to pay constant attention because the contest can turn quickly and result in a shot on net.


Wow, never would have guessed that top 5.

Pyatt is a perfect example of the size/speed power forward overdraft trap. Teams always do this. "He's big and fast, the skill will develop."

He did carve out a solid career as a checker.

I used to play goalie and when I first started playing ice hockey they did drills like this.
The 94
pjcas18 : 9/22/2022 1:49 pm : link
draft wasn't that bad as a complete body of work....except if you consider the drafts best player, Daniel Alfredsson, was drafted in the 6th round, or the next best player, Chara, was taken late 2nd.

Of the top 7 leading scorers from that draft, 1 was a 1st round pick (Ryan Smith)

two of the top 13 scorers in that draft were from the 10th round. The draft, that boring ass event, had 11 rounds back then.


Vegas wanted to include Glass instead of Suzuki in the Pacioretty trade. Glad that Bergevin held firm for Suzuki.
No shock here
pjcas18 : 9/22/2022 5:45 pm : link
Both expected

Every night it's another highlight reel, his shot is unreal. his vision incredible, and he has better moves than anyone I can remember not named Datsyuk. I hope the Habs got a good player with Slafkovsky but I know whoever gets Bedard is getting the proverbial "generational" talent.
Pages: 1 2 3 <<Prev | Show All |