First game on Amazon Prime. This should be something. Thank God the wife has it.


But I got Jefferson on my 1-0 fantasy team.


Who the hell is rooting for Justin Jefferson on this board?? He plays for the Vikings. It's one thing to acknowledge he's a good player but I'm not turning the Giants game off to watch Justin fucking Jefferson, so I'll root for Golladay to play well even though he sucks. Am I missing the point of being a fan of a team?
I'm not comparing Slayton and Jefferson
Jerry in_DC : 9/16/2022 1:31 pm : link
I'm just saying that if Slayton had the coaching and surrounding talent that Jefferson does, the conversation between the two of them would be a lot closer.
RE: I'm not comparing Slayton and Jefferson
ajr2456 : 9/16/2022 1:33 pm : link
In comment 15818807 Jerry in_DC said:


You find the "Jones people" a weird group?

What do you call posters who go out of their way to push the idea that Jones has never been a good QB??

He won a state title in HS and threw for 7,000 yards and 100 TD's. He was the MVP of both bowl games he played in (and won). And he was MVP of the Senior Bowl. I just don't get this fascination with trying to say he's been terrible at every level - what the fuck is that even about?

Was such a good college QB he averaged a whopping 17 tds a year.

Senior bowl MVP?? Wow! He won MVP of the game you can’t blitz in, sounds about right for Daniel Jones.


He was a walk-on... at Duke. That's not a great pedigree you have to admit. Welcome back, by the way.
Never made
Jerry in_DC : 9/16/2022 2:07 pm : link
1st, 2nd or 3rd team all-ACC. Or honorable mention. But you found some good high school counting stats. Cool. I bet he was good during recess in elementary school too.

Are you so fucking dense on these threads that you don't realize the only reason HIGH SCHOOL STATS are even mentioned is because it isn't good enough for some of you that Jones hasn't played well as a pro.

Some posters have to say he's never been good at any level. Is that supposed to strengthen some kind of really strange point?


Didn’t you get embarrassed enough when you got caught forging posts?

If he was so good in high school why was he unranked, had to walk on at Duke, and still was mediocre outside of a couple games here and there at Duke?

Ok you win
Jerry in_DC : 9/16/2022 2:21 pm : link
I will cede the ground that a guy who is a mediocre NFL backup was good in high school. I just watched part of his HS sizzle reel - he made that 5'5" DE look like he was running in mud on the read option. Just so you are happy, I will also stipulate that Jones was probably good in middle school and pee wee also.

It will be interesting to apply this evaluation criteria across the NFL.
Go Terps injected this high school recruiting ranking thing
giantBCP : 9/16/2022 2:27 pm : link
and they ran with it.
Re watch the hit that allegedly injured Herbert
Giants73 : 9/16/2022 2:29 pm : link
Guy has rib pads on, ribs barely get touched and lands on his butt. Hearing tough and heroic is absurd when you view it. Put him on a team with crap o line and he would sit out.

Should be considered in the same breath as Mahommes and Allen with the beating they take in games and don’t put on a show to distract from a horrible pick-6
RE: Re watch the hit that allegedly injured Herbert
giantBCP : 9/16/2022 2:40 pm : link
In comment 15818883 Giants73 said:


He landed on the guy's helmet.
Herbert might be being annointed
Osi Osi Osi OyOyOy : 9/16/2022 2:46 pm : link
by the media too fast, but it's nothing out of the ordinary. Burrow/Allen/Mahomes, the young stud QBs all have a ton of hype. Herbert has the least team success of the group to be fair, but it's not like he's been some loser so far.

That 35yd rope he throw over the middle in tight double coverage with the game on the line was picture perfect. He made about 3 or so passes of that caliber in Week 1 too. Not sure about long bombs and overall but I do know that no one throws a more impressive 20-30 yd pass than Herbert today. He throws ropes, none of that lollipop floating BS.

He's a special talent and I'm sure he'll bounce back from that rough loss like it was nothing.
what's the downside with anyone being annointed too quickly?
UConn4523 : 9/16/2022 2:48 pm : link
being wrong? Anything else?

He's a great player right now. If he winds up not having a great career, oh well.
Not sure anyone can’t like what they see in Herbert
Eman11 : 9/16/2022 2:55 pm : link
As a fan of the game, what’s not to like? He seems like the total package to me….big, tough, can run, cannon for an arm, accurate, smart and has the respect of his whole team.


Mahomes did dodge some landmines. And I still think that was an INT by Samuel because I do not think there was enough evidence to overturn that.

You know who else won MVP Senior Bowl...Davis Webb and Kyle Lauletta. MVP Senior Bowl is not exactly a crowning achievement.
If the best two examples
ajr2456 : 9/16/2022 4:57 pm : link
That Jones hasn’t always been mediocre are his high school stats against questionable competition and winning MVP of an all star game you can’t blitz in, you should probably pack it in.


He is not saying that it is a crowning achievement. He is pushing back against the narrative that Jones has never been good at any level. This does not mean FMIC thinks Jones is the future or is good now. He is simply showing some of Jones’ achievements as a HS quarterback, thanks is literally it.
.
ChrisRick : 9/16/2022 5:09 pm : link
That is literally it.
Haha! Love the high school stats & accolades when we are talking
Jimmy Googs : 9/16/2022 5:12 pm : link
about a guy who is in his 4th year of starting NFL games.

You may want to think about altering your own post and re-submitting it later with an actual compelling point on Jones.

Throw in a few "fuksticks" and a "ponderous" here and there and maybe nobody will notice you changed it yourself...

Winning MVP of a game where none of the other top QBs played in, and had 4 players taken in the first round that weren’t offensive lineman, isn’t some crowning achievement.

Neither of those things prove that Jones was great at any point.


You're absolutely right, it's very dumb to do this comparison, Daniel Jones hasn't even thrown a pick six in the NFL yet.
well you guys got your wish
Producer : 9/16/2022 5:36 pm : link
We got Daniel Jones instead of Justin Herbert.

You should be very happy. Let's revisit this thread in three years.
Really...did a couple of them trip over their feet before
Jimmy Googs : 9/16/2022 5:37 pm : link
they reached the end zone or something?

:-)
I would be surprised
ChrisRick : 9/16/2022 5:47 pm : link
If any reasonable Giants fan would be happy the team has Jones instead of Herbert. I think some fans wanted to see more of Herbert and a more stable environment for Jones before lamenting about Herbert.

I think Jones may have that stable environment now, but I can’t reasonably come to a conclusion where Jones becomes as good as Herbert or really close enough to compare. Although Jones does not have to be Herbert for the Giants to be successful under Jones
RE: I would be surprised
Producer : 9/16/2022 5:56 pm : link
In comment 15819073 ChrisRick said:


I think it is highly unlikely that an NFL team can be successful with Daniel Jones, if the measure of success is Super Bowl appearances and Lombardi trophies.
RE: RE: I would be surprised
ChrisRick : 9/16/2022 6:00 pm : link
In comment 15819078 Producer said:


As we have come to know him? I agree. The last hope at least for this fan is: Jones shows much better under this new staff; a player that is worth keeping because he would be an asset for a team seeking a championship. I do think this is unlikely, but still possible. More likely is that we know how who Jones is.
We are in scary hours if we're resigned to talking about Daniel Jones'
Ten Ton Hammer : 9/16/2022 6:16 pm : link
High School career. 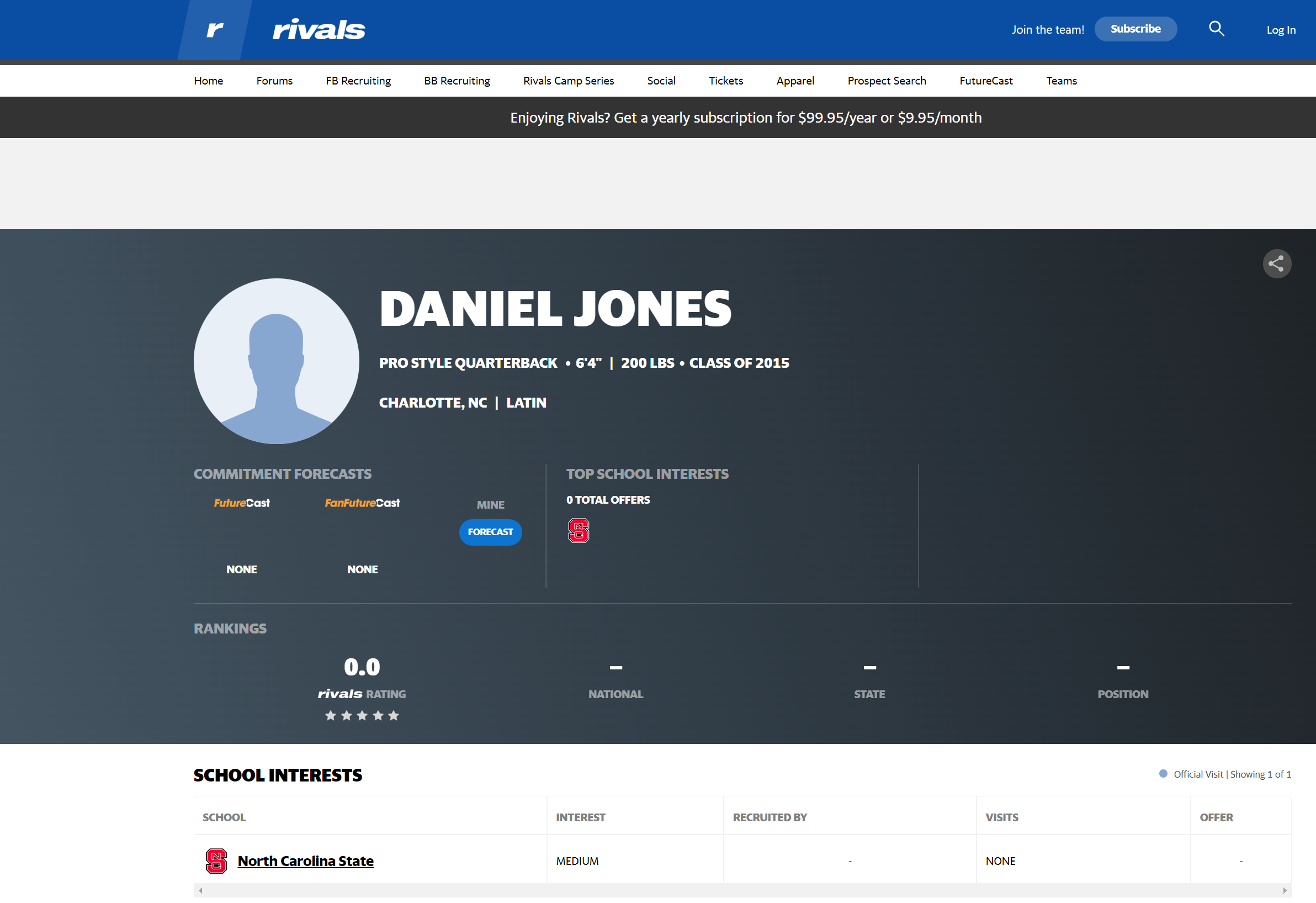 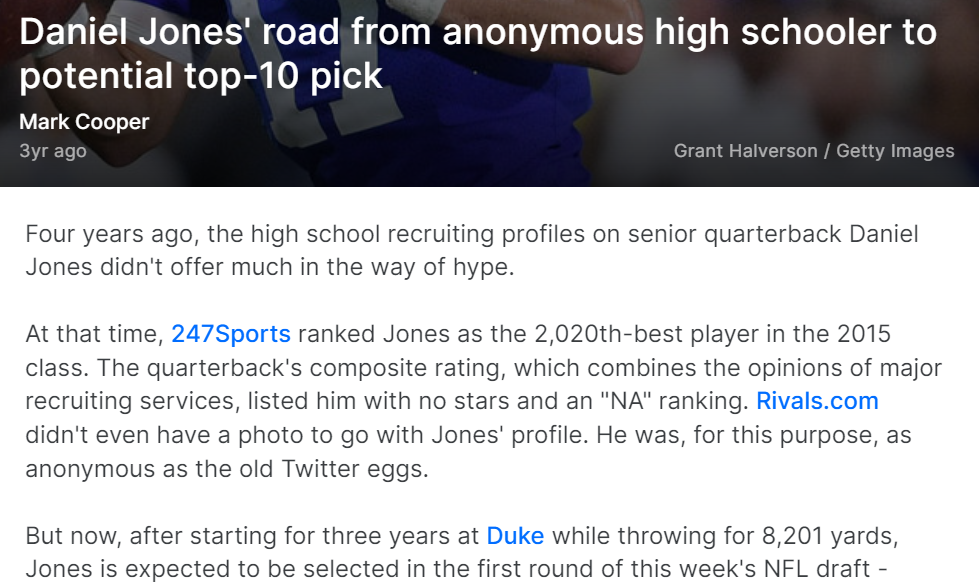 That HS thing is wild to me
Jerry in_DC : 9/16/2022 7:46 pm : link
The guy is big and fast and has a great arm by HS standards. It's definitely an inefficiency in recruiting. Although I'm sure that graphic makes some folks who were highly invested in DJs high school performance a little sad.
RE: Re watch the hit that allegedly injured Herbert
OBJRoyal : 9/17/2022 6:25 am : link
In comment 15818883 Giants73 said:


Kudos. Didn't seem like the point was that tough to see. Of course it was missed by the group it was intended for.

It's really strange the amount of energy put into slamming Jones. Instead of just saying the guy isn't living up to his draft expectations and hasn't had success, we get this kind of narrative pushed:


No - we can't let Jones just be disappointing, we now have to say that he was never good and he'll extend that to never having a meaningful moment. I'm sure winning 2 bowl games and a HS title is something everyone does! Such petty bullshit. Why not call him a shitty basketball player too?

Better yet - just keep talking about how he was a walk-on at Duke or continue to post about high school to reiterate that you still can't grasp the point.

Is saying he never had a meaningful moment supposed to add depth to the idea he's playing poorly? I'm trying to figure what the fuck that narrative is even supposed to mean.

And not surprisingly, the point will likely be missed again.
You shouldn't have to put up with this continued petty bull, pushing
Jimmy Googs : 9/17/2022 8:44 am : link
of narratives and others not getting your point.

If only there were a way you could stop even having to read it somehow...