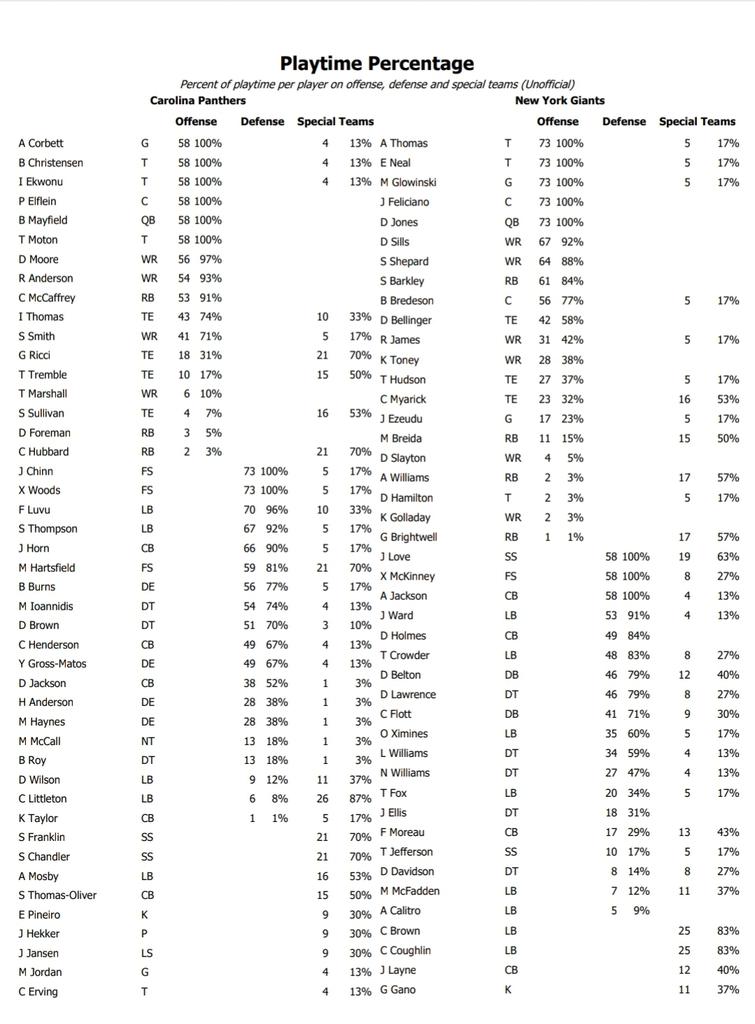 
No, they were defending McCaffery, so extra DB in the game as almost everyone speculated.
That's impressive that Brightwell had one play
robbieballs2003 : 9/19/2022 8:43 am : link
and produced.
...
Eric from BBI : Admin : 9/19/2022 8:43 am : link
Q: We saw (Wide Receiver) Kadarius (Toney) play a lot more today, and then we look at (Wide Receiver) Kenny (Golladay) on the other side. He’s one of your highest paid players…
A: It’s a continual competition at receiver. I’ve said it since when? I’m not being a jerk. I’ve said it since the middle of camp, right? It hasn’t changed. It’s going to be a continual competition. Kadarius had opportunities today, and we’ll see what it is next week: maybe it’s (Wide Receiver Darius) Slayton, maybe it’s more (Kenny Golladay) KG. We’ll see where we go with that. But I think that position, we’re just going to keep on rolling guys and play the guys that week that we think would give us the best chance. And the other guys got to be ready as backups.

Q: How did Kenny handle that?
A: Great. Like a pro. I told him during the week that we were going to go with (Wide Receiver David) Sills (V). He acted like a pro. I said, ‘Be ready to go.’ Now, does that mean it’s going to be that next week? No, because you see what we did from one week to the next. We’re just evaluating all those guys on a game-by-game basis. I think it takes a lot of mental toughness, too. That’s not an easy thing to hear, and I appreciate them being pros. We’ll go out there; we’ll practice this week. It’s not going to be a play-by-play every day of how they do every practice. Those guys will compete and (we’ll) try to figure out the best way to utilize them for the next game.
RE: That's impressive that Brightwell had one play
Eric from BBI : Admin : 9/19/2022 8:44 am : link
In comment 15822845 robbieballs2003 said:


Totally agree Eric. I think a lot of folks do not realize how much formation and previous play design and set up come into play on success or not success in situations like that. The Giants under Judge were a freaking prime example of how we used very little build upon in our plays from start of the game to end of the game and many times we literally telegraphed what was coming just by who came into the game.
I've always found coaches are a lot like
fkap : 9/19/2022 8:53 am : link
politicians. What comes out of their mouths at press conferences needs to be taken with a grain of salt.


The big difference is that Sills has Jones's trust and KG does not.
Golloday
JoeyBigBlue : 9/19/2022 8:59 am : link
Might be a worse signing than Solder.

Plus, and I know this isn't registering with many fans, the NYG weapons outside of Barkley simply are not that good.


The two WRs that Jones trusts are Shepard and Sills. He will go to Toney if he can. For whatever reason he has no rapport with KG. If Slayton gets into a game, Jones will also go to him.
section125
Eric from BBI : Admin : 9/19/2022 9:09 am : link
You and jvm are spot on here... there has been an incredible lack of chemistry between Jones and Golladay since Golladay signed. I originally attributed it to Golladay not practicing much with Jones in 2021, but it's more than that.


and yet had more impact than Golladay the week before.

We all wondered if Johnson's injury kept Sills around but maybe it kept Golladay around. I know Cap issues would be there but I think the Giants organization- this new regime has little interest in Golladay.

really need Robinson to get healthy to help us have more variety in the attack.

** BTW, Richie James wasn't that bad a few years ago with the Niners and injuries derailed that. Maybe he is a guy who can be a solid 4th or 5th guy with PR ability going forward.
Golladay and Toney
Jimmy Googs : 9/19/2022 9:28 am : link
It is really just insane that we barely play these guys, hardly ever see them produce, and cannot even trade them for peanuts or cut them because of the $ ramifications.


I have a feeling that Jones just does not trust himself to throw to Golladay and let Golladay get it. I think Judge beating him up on turnovers is still in his head. Golladay does not get open enough for Jones to "take a chance".
I do think Golladay would have been cut if not for the cap situation.
RE: Golladay and Toney
stoneman : 9/19/2022 9:34 am : link
In comment 15822942 Jimmy Googs said:


I still have hope for Toney - not so much for Galloday. Really bad signing and waste of cap. Toney is really just a roster spot (still under rookie contract). But without both, the WRs room looks pretty bare when Shepard is your #1.
looks like 2 tackle eligible plays
TJ : 9/19/2022 9:35 am : link
Were they goal line situations? Wonder if Andrew Thomas collects another TD reception some time this year.
RE: Golladay and Toney
section125 : 9/19/2022 9:36 am : link
In comment 15822942 Jimmy Googs said:


I still have some hope for Toney and absolutely none for KG. Jones just will not go his way. It is a poor fit.

Toney will be high maintenance, just a "different" guy. It may be that once he starts to get involved, he will actually start to play to his potential. If Toney gets involved it completely changes the offense.
Perhaps we are seeing what Sy's red flag with KT is - almost like he has ADHD on steroids...
It's too bad...but a sunk cost at this point
AnnapolisMike : 9/19/2022 9:40 am : link
Toney's problem is that he does not get it. Golladay just no long has it. I think we will see production from both of them over the season. Toney more so than Golladay. I think Section is right that DJ just does not trust that Golladay will be able to get the ball.

Bets must be coming in fast and furious on that one...
Love that this coaching staff doesn't have "scholarships"
PatersonPlank : 9/19/2022 9:45 am : link
if guys like Golladay don't produce, and James does, well then they play. I bet the previous regimes would have been playing Golladay because, well he is Golladay
Ezuedu with only 17 snaps
WillieYoung : 9/19/2022 9:53 am : link
Don't think he played after giving up the second A gap blitz. Hasn't learned to check for the blitzer before engaging in a double team with the center.
RE: Ezuedu with only 17 snaps
section125 : 9/19/2022 9:56 am : link
In comment 15823010 WillieYoung said:


He has a lot to learn, but dear Lord he has some serious potential to be an outstanding LG/OT. He has unbelievable foot speed for 315 lbs. I think after the midpoint he will be pushing Bredesen to the bench or center.
Why does this show Bredeson taking snaps at center
FranknWeezer : 9/19/2022 9:56 am : link
when clearly he was swapping out at guard with Ezeudu?
The oline, which didn't play great
jvm52106 : 9/19/2022 10:02 am : link
must be looked at with an objective eye. They barely played together- PERIOD this summer. Injuries kept they from playing and that is tough for a rookie (JE).

I am seeing some good stuff and some stuff that has to improve. I do believe Jon F is playing injured though.

What we need is health from our Oline so they can build on that chemistry.

Speaking of snap counts and play etc., Golladay's pay per play must be the highest in the league...


Anyone else notice, though just slightly shown, the Giants involved the TE's more in the passing game. If we can get any semblance of a threat at WR and out of the backfield, we will see our TE's in very favorable matchups down the field.

One thing we might be able to do is showcase Toney a bit before the trade deadline and move him for a pick to a contender (if injuries set in elsewhere)..


Being Sy, who would you think they look at to draft at WR. Someone like Jordan Addison, Wicks from Virginia?

What is your current board looking like?
The counts that stand out for me on D are Ward, Holmes, and Belton.
Big Blue Blogger : 9/19/2022 10:28 am : link
The high percentages for Holmes and Belton speak to the game plan, as well as Belton's rapid recovery and strong preparation. For his first pro game, coming of a long layoff, Belton showed a lot of positive signs (and also some issues, as expected). Not sure what to think of Darnay Holmes. We tend to notice him when he gets beaten or flagged. Maybe his overall tape is better than his lowlight reel.


same i would have pegged him initially as a guy destined for PS but it looks like he has whatever the "it" is that's needed to be a load in the middle of a defense.

Baltimore has always had an eye for those types (Michael Pierce, Brandon Williams) so it looks like Wink knew what he needed.
RE: RE: That's impressive that Brightwell had one play
RCPhoenix : 9/19/2022 11:27 am : link
In comment 15822848 Eric from BBI said:


If only Sills ran forward to block #25 instead of turning around that would have been a TD
on the last DJ run
jmalls23 : 9/19/2022 11:45 am : link
Sills is standing alone with his hands up in the middle of the field. Just saw replay
RCPhoenix
Eric from BBI : Admin : 9/19/2022 11:47 am : link
Sills looks like he's moving towards a defender who he probably was told to move towards first.
Interesting Toney vs James
Matt123 : 9/19/2022 11:55 am : link
Toney had almost as many snaps as James, yet we never really heard his name called. I guess that's the difference between getting on the field and having plays designed where he's one of the first options?


Toney had to designed plays in the first two series and didn't do much with it. Not saying it was his fault but, he had a chance.

Speaking of James, even though we ultimately picked up that 3rd down his bubble catch would have gone for more yards if he caught it cleanly as he turned up field. Might changed the drive completely.
RE: RCPhoenix
RCPhoenix : 9/19/2022 12:19 pm : link
In comment 15823336 Eric from BBI said:


I don't think they will have a profile. Because they're starting from near-nothing.