I never said anything about Cousins, lol. We're talking Wilson. The last 10 or so he's been an elite player. I don't get into that crap of tiers or who's better. The guy was one of the best offensive players on one of the better offensive teams. I keep it simple. He elevates players around him. He helped Tyler Lockett (who is a good player) put up pro bowl numbers. He won a lot more than he lost.

Cousins is underrated by many but he's not Russel WIlson.
His small physique caught up with him
sb from NYT Forum : 9/19/2022 11:35 am : link
...For the past three years he's really fallen off in the second half of the season.

Sure, he will pull a rabbit out of his hat a handful of times each game, but he is not someone I would be building my franchise around anymore.
Never understood the love
AnnapolisMike : 9/19/2022 11:37 am : link
for an aging Wilson.


Wouldn't have been similar? How do you know? It certainly would have been two firsts and two seconds, plus more. Denver's first this year was number 9, so giving them 7 wouldn't have change the rest too much.


I think you are seeing glimpses of how short a rebuild can be if you have good coaching and difference makers. We are lacking in the later but there’s no reason a team needs 3-5 years to build a contender, it can happen quick.


There isn't a loser in this right now, that's the point. Its been 2 games and you of all people should know that (and talk about it on other Giants related threads today). 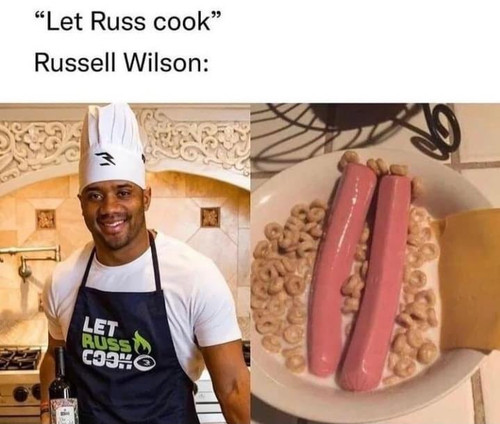 I was in favor of it and certainly could be wrong
bceagle05 : 9/19/2022 12:37 pm : link
but my biggest issue with those threads were people bringing up trades from 60 years ago as justification for not doing it. You can always find cautionary tales when a franchise has been around for a century.
...
ryanmkeane : 9/19/2022 12:38 pm : link
Wilson belongs on a super bowl contending team that basically only has 1 need: veteran clutch QB who is still good. He basically has 2 years left I'd imagine.


Your Saying Russell is better than YA Tittle?


I didn't see Tittle play. But yes, I'm probably going to say Wilson is better than Tittle.
I think some here
River Mike : 9/19/2022 1:14 pm : link
are missing the gist of the question. It's not Wilson VS Jones, it's wilson and his cost to the franchise vs keeping Jones for this year to see what you have in this system. Many of you argued that someone like wilson could elevate those around him, carry them on his back. Of course it's too early for a solid conclusion, but what are your thoughts at this point?
RE: I think some here
UConn4523 : 9/19/2022 1:25 pm : link
In comment 15823547 River Mike said:


Yes we are, I know I am. It’s a no brainer if it’s just Wilson Vs Jones, it’s a conundrum when factoring costs.

Considering Denver should be 2-0 right now, and likely 0-2 with Locke I can say they made the right move. I would have traded for him if the package was reasonable.
Hackett might be the worst coach I've ever seen
Osi Osi Osi OyOyOy : 9/19/2022 1:29 pm : link
I don't particularly like Russell Wilson and he certainly needs to step up. But to me the key takewaway from the Broncos is how utterly clueless their HC is.
Producer
Eric from BBI : Admin : 9/19/2022 1:29 pm : link
Better, can we review after the next three years... see how Wilson plays when he is 33, 34, and 35. And compare to Neal and KT.
bad coaching can't really hurt players...
BillKo : 9/19/2022 1:31 pm : link
...I forget the Bellichick quote but it's something like that.

Apparently the coach yesterday was again bumbling the clock, he appears in over his head right now. Of course, that will probably change but that team is in a tough division.


Schoen didn't like the costs so it would have had to be lighter? That makes no sense. You think Seattle would have taken less to send him to the Giants? Also don't think they would have given up No. 5, so the first round pick would have been 7, two spots higher than Denver's, not a lot of difference to Seattle. It most certainly would have been two firsts and two seconds to start. To start.
RE: Producer
Producer : 9/19/2022 2:20 pm : link
In comment 15823589 Eric from BBI said:


How does it not make sense? If Schoen isn't paying that price then hard stop - we aren't (and didn't pay it). But our picks in 2022 were worth more, how much weight that holds, I have no idea, but probably a decent amount.

Its splitting hairs now though. I'd probably do it and understand why we didn't. I'm not beating a drum that we missed out on some can't miss opportunity and don't mind one bit if I end up being wrong on it. But asking this question after week 2 when the team that traded for him should be 2-0 is pretty funny.
I was never in favor of this deal
Matt M. : 9/19/2022 2:22 pm : link
I like Wilson, but even if he didn't struggle last year, it wouldn't have made sense to me. This was not a team 1 QB away from contending, so why would you trade for a 33 year old QB? Then look at his play last year. I know he struggled from his injury, but all the more reason not to make that deal.
RE: Hackett might be the worst coach I've ever seen
djm : 9/19/2022 2:25 pm : link
In comment 15823587 Osi Osi Osi OyOyOy said:


Of course it probably wouldn't have been 5 and 7, but it would have been one of them and a 2 this year, and next year's 1 and 2 - to start with. That's four premium picks to start with for a steam trying to rebuild. Now add in a few more picks, a couple of players (we didn't have much to offer, so imagine Love and/or Robinson?) and then find an additional $17 million in cap space.


I agree it's a high cost, but you're getting a HOF qb. And cap space is never a reason not to add a franchise qb, it's just an excuse. Cash over cap permits you to add an expensive QB even if you're up against the cap.
Why do you keep defining people
UConn4523 : 9/19/2022 2:37 pm : link
that disagree with you as unable to apply or define the “cost”? The cost is the entire point of the thread, we all know what it is, same information. You have a different timeline for a rebuild it sounds like, mine is shorter. That’s really it.
RE: RE: Wilson pulled off the greates heist since the Lufthansa robbery!
Returning Video Tapes : 9/19/2022 2:44 pm : link
In comment 15823416 Producer said:


When will the argument that QBs are the entire team die. That Broncos team was stacked that Peyton’s corpse won a SB with. Lots of QBs around the league would probably win a title with them (shit Teddy would have had an outside shot). Problem was they were starting Brock Osweiller who was famously dealt WITH money to get rid of his contract and other bums.
RE: Why do you keep defining people
Producer : 9/19/2022 3:00 pm : link
In comment 15823714 UConn4523 said:


Yes, right now, the coach is getting about 95% of the vitriol from the fans. They are ready to run him out of town...they sent their PR team on the field yesterday...minus a PR. They were so bad at getting plays in that the fans were counting down the last 10 seconds of the 40 second clock to prevent any more delay of game's. Gotta say....kinda fun to sit back and watch some OTHER team fall apart!!!!!:)

My thought on Wilson, one I have broadcast to some of my friends who are Bronco fans...I cant get over the fact that we, the Giants, as crappy as we were, beat that Seattle team with Wilson at QB. And this was with McCoy at QB! The few times I saw him play the past few years, he looked....OK to good. And you dont give up that package for OK to good.
this comment from Carroll
Osi Osi Osi OyOyOy : 9/19/2022 4:32 pm : link
after their win over the Broncos really really stood out to me.

Surprisingly, Carroll revealed that part of the Seattle’s defensive game plan was to ensure that Wilson did not remain the pocket, and was forced to his left.

“When he [Wilson] moves to his left, it’s hard for him numbers-wise and all that, so we just we were able to do some stuff,” Carroll said, per Seattle Sports 710AM. “It wasn’t perfect at all, but it was effective and we felt like we were controlling it. It wasn’t always just getting clean to get the sack, it was to try and make him go where we wanted him to go, and guys did a good job.”

This is a really strong quote from Carroll imo. He knows more than anyone what Wilson's faults are and him putting this out in the open so nonchalantly was surprising.
Carroll may think...
bw in dc : 9/19/2022 4:40 pm : link
he cooked-up some Belichickian scheme, but Wilson still threw for 340, 8+ YPA, 69% completion, 51% QBR, and a TD with no INT.

If Denver doesn't inexplicably cough-up the ball within the five-yard line twice, Carroll's comments carry even less weight.
For all the shit Wilson takes
UConn4523 : 9/19/2022 4:44 pm : link
what has Carroll done since the legion of boom? Never really liked him as a HC and he seems like as much or possibly more of the problem in Seattle. Look at the terrible trades he’s been a part of too over the years, no development on the OL, etc. How many losing seasons do they put up with before he’s fired?
funny how another week changes things
UConn4523 : 9/20/2022 12:24 pm : link
Seahawks head coach Pete Carroll said the team needs to open up the passing attack.

This could an intricate, long-term trolling of former franchise QB Russell Wilson, or it could be desperation in the face of offensive struggles in the young season. “After two weeks of watching Geno play, we don’t need to hold him back at all,” Carroll said Monday. “Geno has got his game ready to go. We need to trust him and maybe give him more opportunities and stuff. We’ve been pretty solidly conservative, counting on running the football.”