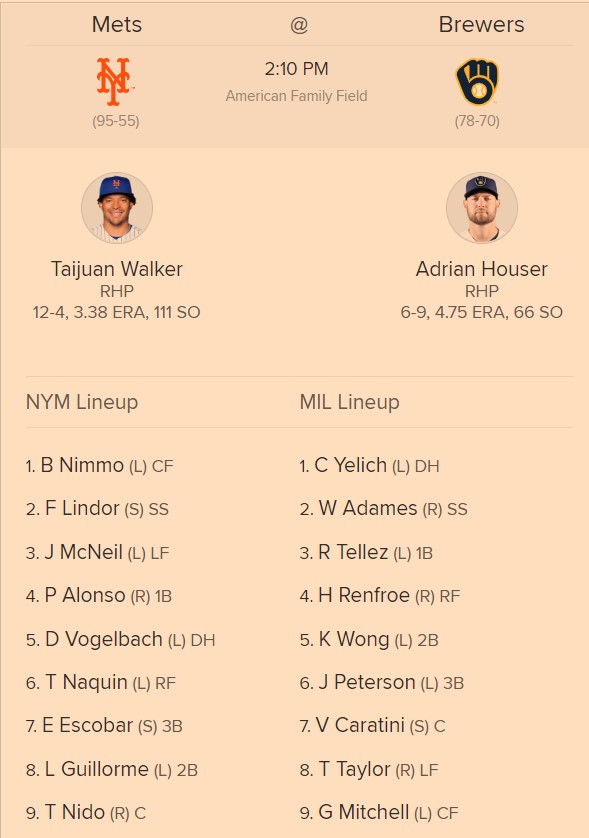 
Last week Braves lost 4 out of 5. Two to Seattle and two to Giants

Mets need to head to Atlanta in 9 days up 1 game on the Braves. If they do that, I like their chances. All they'd need to do is win one game there and they'd have the tie-breaker and then head back home to play the last three games of the season against the Nats (no jinx meant).
RE: Why did he take Peterson out?
Optimus-NY : 9/21/2022 4:46 pm : link
In comment 15826772 Dennis said: 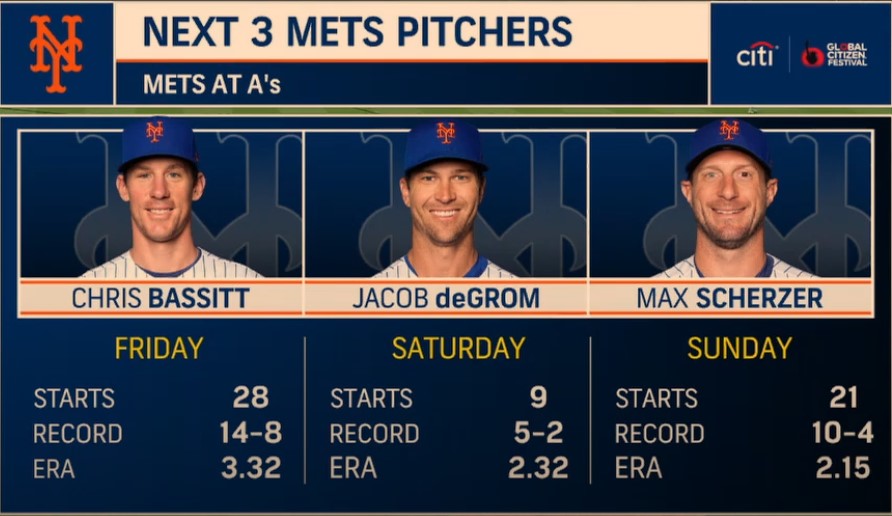 Need to win all three games there vs probably three left-handed starters. The Mets will be off again on the 26th and then head home to play the Marlins for two games, and then then have another off day on the 29th for the last time this regular season before heading to Atlanta on the 30th for three games.
Drew Smith cannot be on the playoff roster
CooperDash : 9/21/2022 4:57 pm : link
There’s just no way he’s a reliable relief pitcher.
RE: Drew Smith cannot be on the playoff roster
Optimus-NY : 9/21/2022 4:59 pm : link
In comment 15826789 CooperDash said: 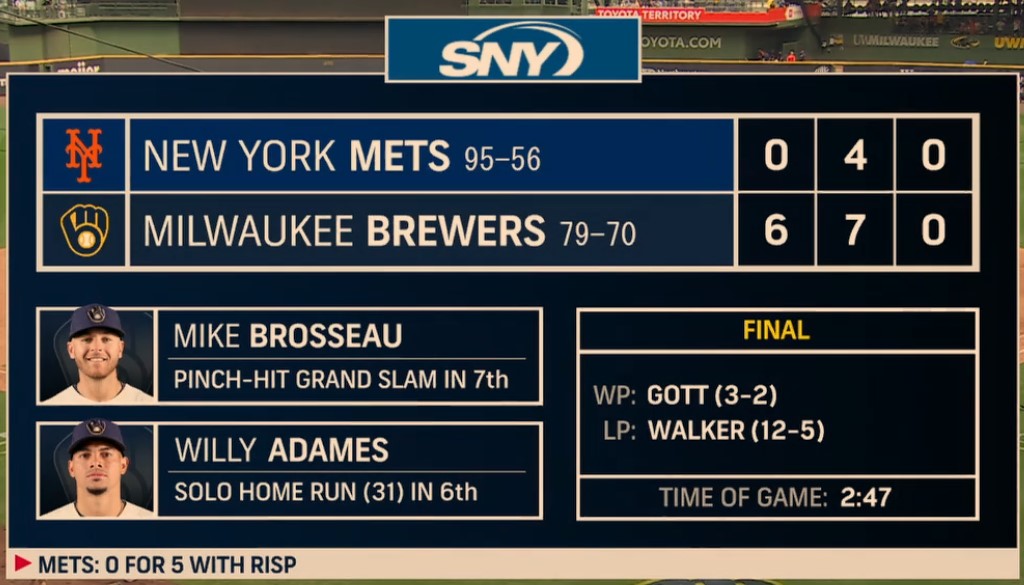 Mets need to out this behind them and play to win the next 5 games and hope the Phils win one against the Braves. No excuses for the Mets playing against the likes of the Triple A's in Oakland and then the Marlines at Citi. They'll have three off-days to help them out too before heading to Atlanta in nine days. Just need a 1 game lead before heading there. hopefully the Mets get healthy (Nimmo, McNeil, and Marte).
Vote for the 4th starter
Optimus-NY : 9/21/2022 5:11 pm : link

I voted for Carrasco 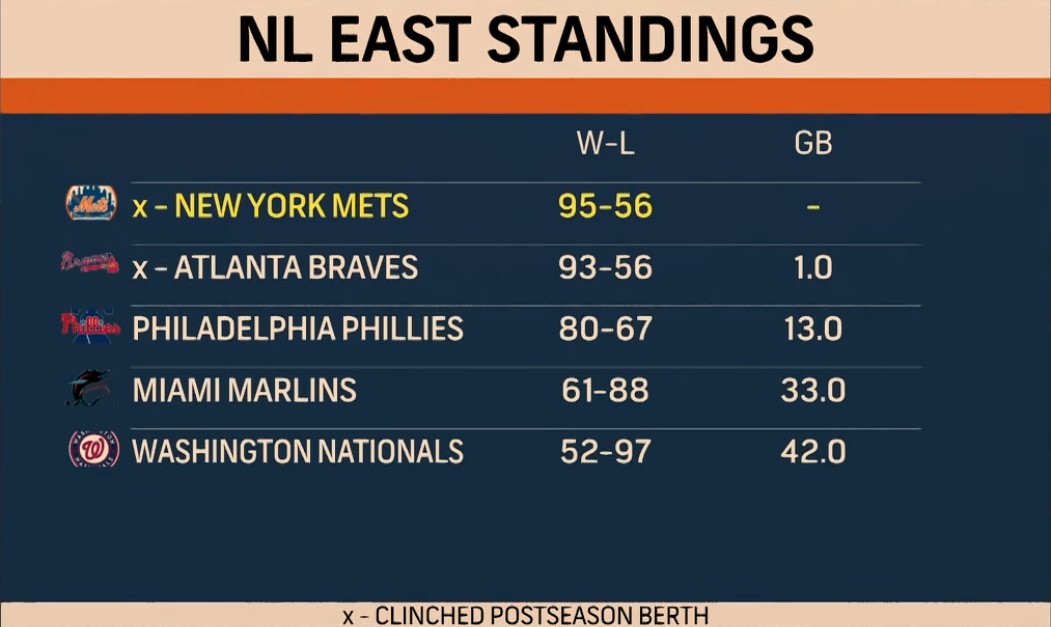 Gonna need help from the Phillies though since the Mets and Braves are even in the loss column. The Braves have two games in hand.
Buck's press conference is on now.
Optimus-NY : 9/21/2022 5:19 pm : link 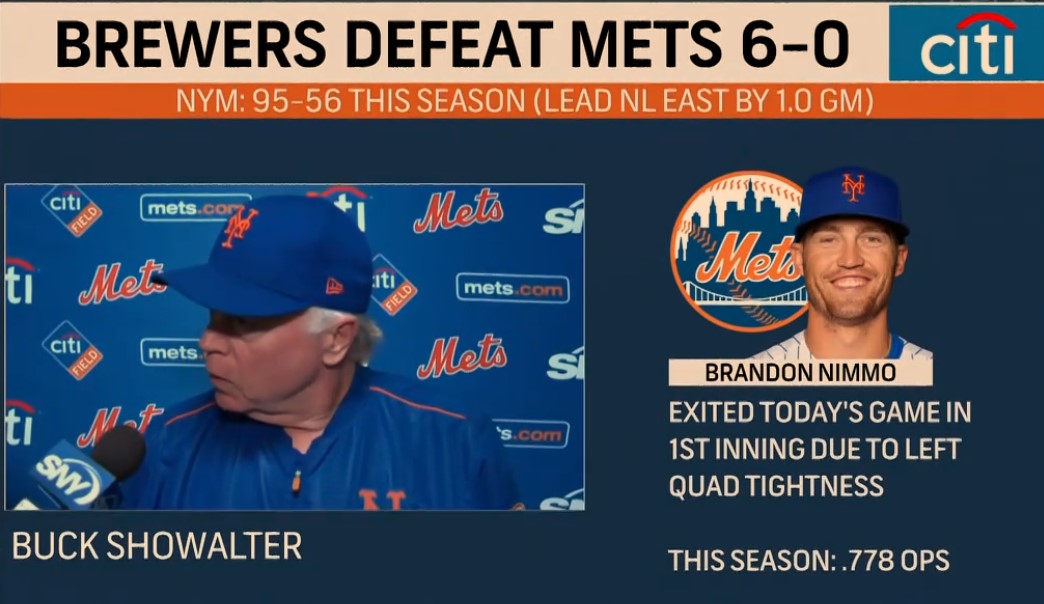 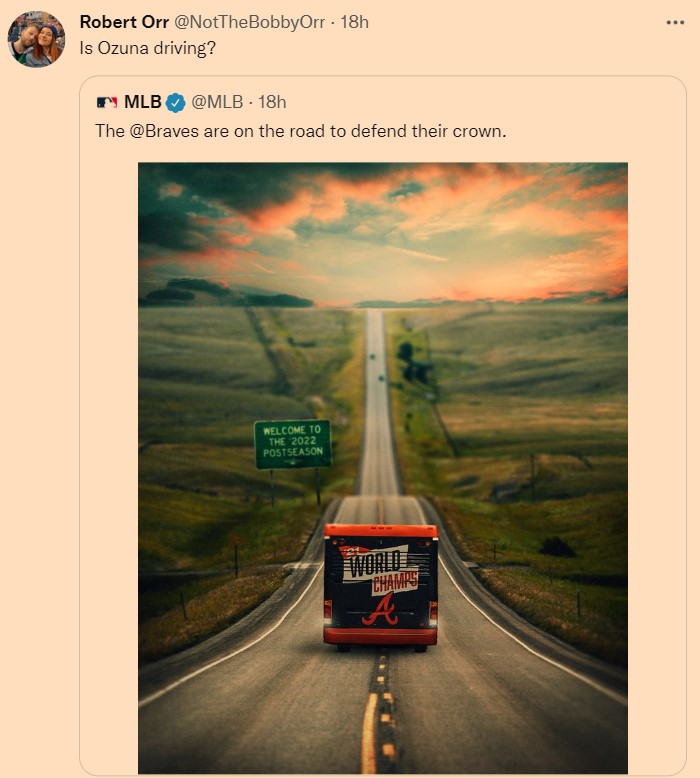 Funny that now the beat writers are asking about the 4th playoff starter being Carrasco or Walker when all of you thought Carrasco could be a 3rd starter. With those numbers he might be in the pen

I just saw the grand slam today. I dont care if you havent pitched in the big leagues recently, missing your spot by over a foot and hanging a slider with an 0-2 count in that situation just cannot happen

If the Mets can't go with a 3-man rotation I think they need to ride the hot hand, but maybe stack them and have a short leash so start either one of them, but have the other ready. kind of like a bullpen game. I imagine both would be on the PS roster.
I generally feel like it's hard to expect sweeps
Chris684 : 9/22/2022 10:40 am : link
but I think this weekend is an exception for the Mets. We are throwing our big 3 against the punchless A's. Drop the hammer and take all 3.


Mets blew it IMO by not using the past few weeks to stretch him out. They are more confident in Carrasco and Walker than then should be.

Peterson
Lucchesi
Maybe Butto or someone else
they are getting lucky on the carrasco option
Eric on Li : 9/22/2022 11:22 am : link
the salary isn't crazy but the $11m post buyout is probably better spent elsewhere. i'd guess Trevor Williams will cost half that and they can put Peterson/Megill into the rotation. Butto is looking like he may be an option at some point next year at least as depth too.

JDG and Bassitt are going to require raises in the $10m ballpark, so letting Carrasco walk pays for 1 of them.