Agreed. I could be wrong, but I seem to remember Jake having more movement on that FB. Lately it's had plenty of velo; 98-102, but it seems to be more straight. 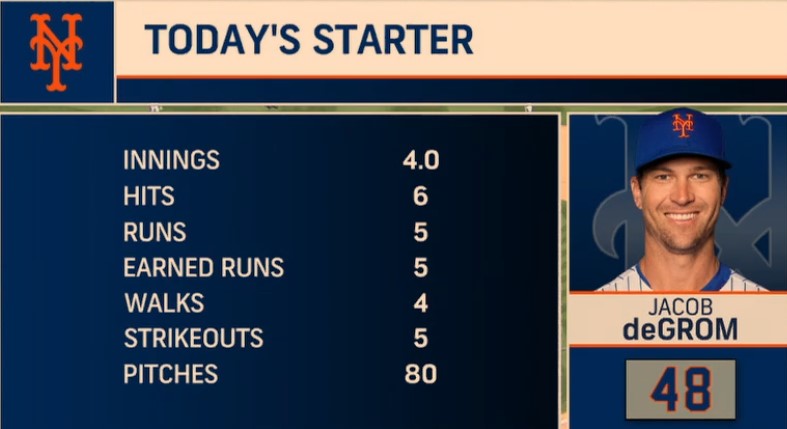 
it looked like he was struggling with his release point and obviously he was pissed at some of the calls.

they also put him in a position he's not practiced in having to try to pitch with a lead of more than 1 run.
DeGrom
five5 : 9/24/2022 5:55 pm : link
We all know how great he has been the last several years. That being said, he needs to be treated with kid gloves. He has become a 5-6 inning pitcher who tends to miss a significant amount of time which makes it difficult for the entire rotation. He hasn’t had his fastball the last few starts which is very alarming with the playoffs around the corner.
RE: RE: RE: RE: Every time deGrom has had one of these games in the last few years
Snablats : 9/24/2022 5:55 pm : link
In comment 15829492 allstarjim said:

Jake will come back dominant next start! Glad he got a stinker out of the way

Pete getting hot again at the right time, Vientos and Ruf finally putting good ABs together.


Well the last time he had a start like this was May of 2019 and he threw a 2-hitter in 6 IP with 8 Ks and 1 ER on regular rest so you're full of it and talking out of your ass.


No YOU are fucking stupid. You're not even half as smart as you think you are, bub. You are a breathing example of Dunning-Kruger.

Your post had no truth to it whatsoever. You were talking out of your ass, I corrected you, you didn't like it. Suck it up, bitch.

If you don't like it, show me I'm wrong. You can't, because when we've "lost deGrom for months," it didn't happen under the conditions you described whatsoever. You're the one who can't handle the truth.
OK
PakistanPete : 9/24/2022 6:25 pm : link
so the Dunning-Kruger effect was (maybe) the last thing I was expecting to think about in a Mets thread. :P

This game sucks, but it's not over yet!
Hilarious
allstarjim : 9/24/2022 6:25 pm : link
Snablats: EVERY TIME deGrom has one of these games the last few years, his next start is pushed back, then he ends up on the DL and we don't see him for months.

ASJ: Probably demonstrates how that statement is not even remotely true

So, it seems something physical possibly occurred when Jake went out for the the last inning in his previous start and it carried over to today's game. 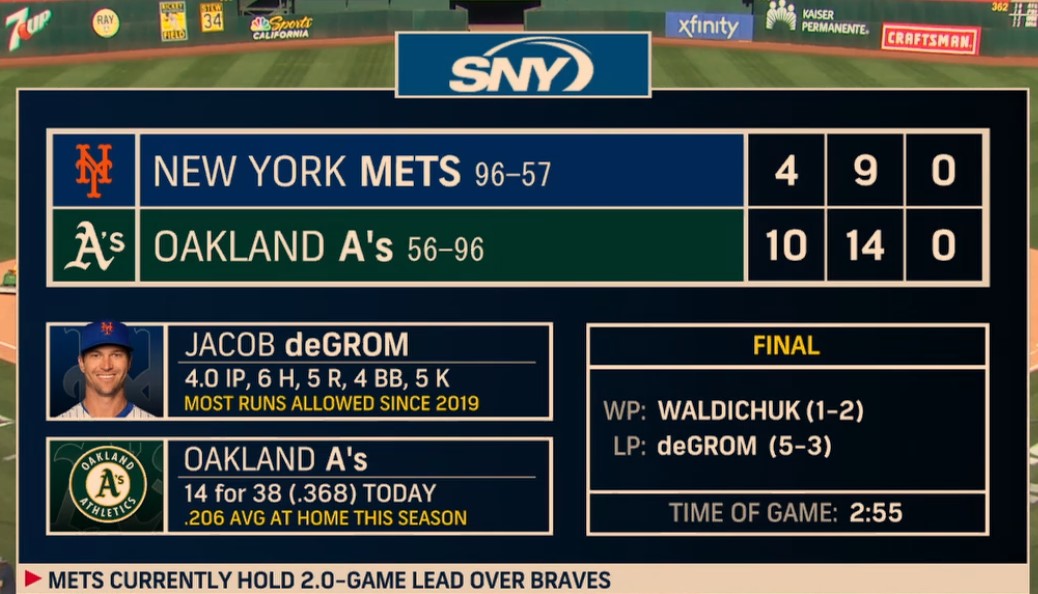 Please save us tomorrow Scherz!


Wait how did I get pulled into this??

Appreciate the apology but I didn't really engage on the topic..


Especially after Mets scored 3 in the first! 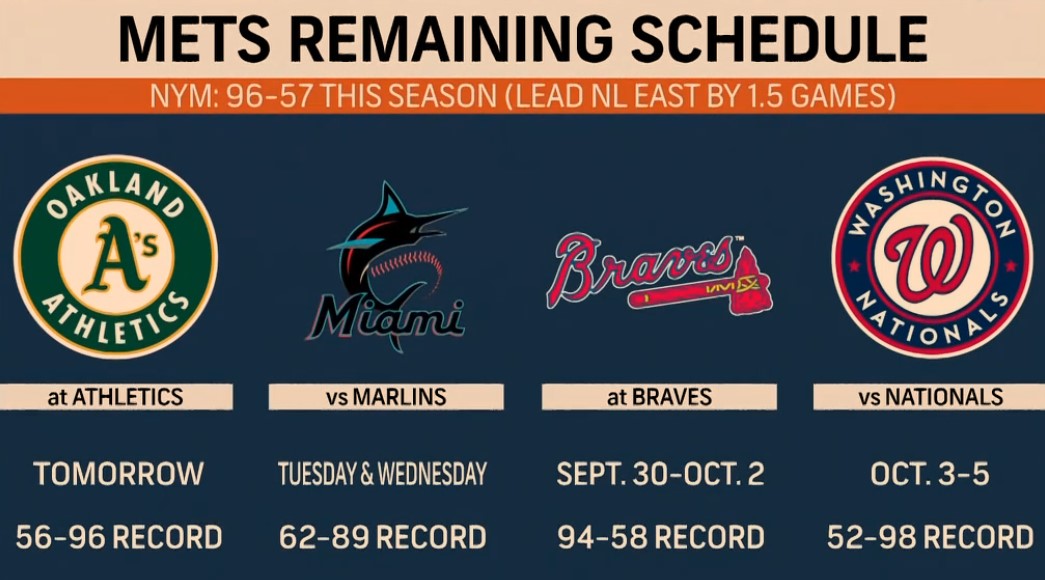 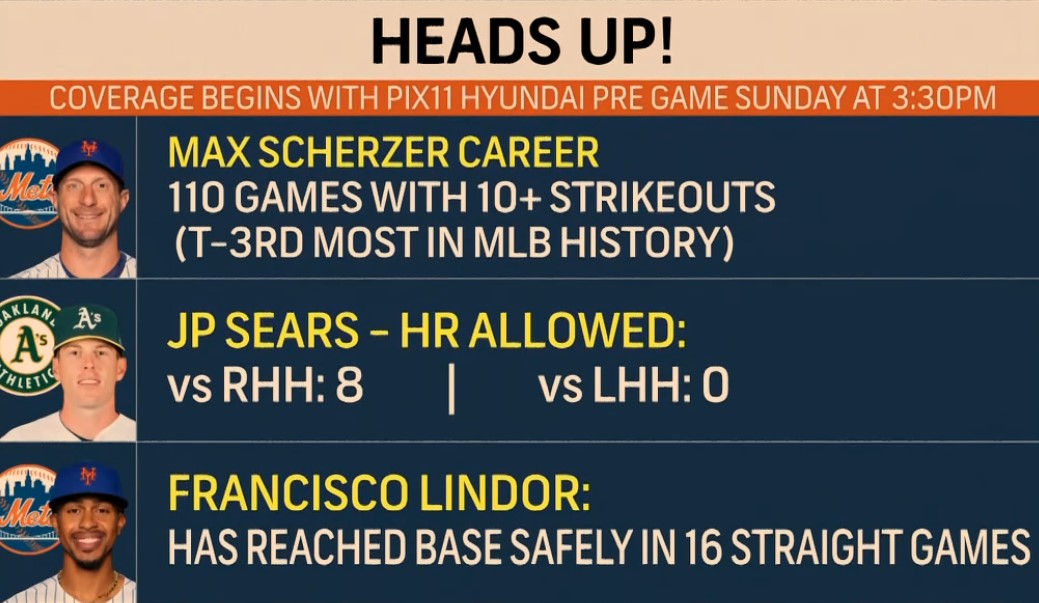 Buck said that Luis G left the game around the 8th inning with a knot on his forearm as a result of having been hit twice in three days, or some thing to that effect, since he wasn't used to getting hit often. I remember him moving his arm down and getting hit on right forearm I think earlier in that game. Sick of our players getting plunked like they have all season. Marte's out because of that shit. Need Luis G back tomorrow.
RE: This didn't go the way we hoped and expected, but tomorrow's another
Optimus-NY : 9/24/2022 7:52 pm : link
In comment 15829560 Ira said:


Fack, now I feel like the dick. Apology accepted and I also apologize for coming back at you the way I did. I got carried away.

Good to hear he thinks its not physical. However, Im not quite sure I completely believe him. What do we expect a guy opting out of his contract to say? Of course, he is going to minimize injuries. Not saying it was conscious on Jake's part but we will see how does in Atlanta.


Blevins also brought up the idea that Oakland has a terrible record and this was redemption day. Sometimes things just snowball.

My primary concern is not this game because anybody can have a bad game. It's that we saw the same thing in the last inning of the previous game. Everything up, Not getting swings and misses. From a guy with an extensive injury history.

But still good news that Jake said he felt fine physically. And also said he apologized to Angel Hernandez because after reviewing the film, he saw that Angel was right: those pitches were balls

Degroms velocity was there
bhill410 : 9/25/2022 7:20 am : link
His control and the bite on his slider were not. It was very very unusual for what we have become accustomed to. But he also has shown some dents in the armor the two starts before this.
he looked like he was struggling with his release point
Eric on Li : 9/25/2022 10:39 am : link
after a lot of pitches i saw he was holding his follow through almost like a golfer off balance after a bad swing trying to find the right position. yesterday seems like it was just one of those days, just sucks they blew a 3 run lead against a bad team.
the normal small sample size caveats apply here to vientos
Eric on Li : 9/25/2022 10:57 am : link
but if we look at his numbers after 2 good games things look a lot different.

but the real area of encouragement is in the batted ball data. things obviously haven't completely clicked yet as he's made inconsistent contact, but when he connects it looks like he's going to be able to do damage. yesterday's homer was just 1 hit but it looks like the big opposite field power he showed in the minors will join him in the big leagues.

he's already barreled as many balls as baty did in half as many batted ball events (15 vs. 30) and his 7.1% barrel% would be about 70th percentile leaguewide if he were qualified and 2nd best on the team to just Alonso. his 91.7mph avg. exit velocity would be best on the team, 90th percentile and tied with Mike Trout for 26th best overall. Just as it looked with Baty pre-injury we are seeing enough flashes to warrant finding regular playing time for him.


I agree. But then the question becomes why did he lose his release point?

A number of people have brought up the idea that he was giving up hard hit balls the last couple of starts and not getting swings and misses.


But his k rate was 14.2 per 9 innings so he was getting tons of swing misses. I think people are starting to compare Jake to 2021 Jake as the standard.But his 2021 was historic and had he pitched another 65 innings at the same level, it would have been the best season ever (excluding the deadball era). Better than Gibson, better than Koufax, better than Bob Feller, better than Doc Gooden.


impossible to say, even in his best days tiger would lose his driver sometimes. and when you aren't getting results sometimes you start changing things on the fly which can be counter productive. if i were guessing i think as he was getting hit hard jake started trying to make changes on the fly testing different release points and it just wasn't working.

jake has had so few of them i think it was just his time to have a bad day - and he wasn't helped by the walks and mcneil misplay. my guess is he spends the next 4 days watching a ton of video and trying to get himself into his normal comfortable motion and he and the team behind him have a more normal outing next time out.
RE: RE: RE: he looked like he was struggling with his release point
Vanzetti : 9/25/2022 11:14 am : link
In comment 15829781 Eric on Li said:

Lets hope he pitches against the Braves
Pages: 1 2 <<Prev | Show All |