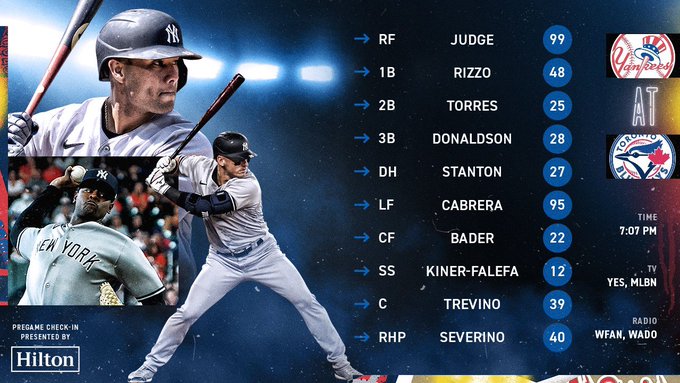 
Can't see how he doesn't earn the start over IKF then...

Donaldson and IKF have to battle for 3rd.
Yes I think Taillon is a lock for the rotation
Greg from LI : 9/26/2022 4:54 pm : link
Either German or Severino could be valuable out of the pen, more so than Taillon IMO.
adamg
arniefez : 9/26/2022 5:06 pm : link
The GM for Life spent 55 million dollars of the owners money on a replacement level 3B to play poor defense at SS and hit like the replacement player he is. The fact that he came with the baseball corpse of Josh Donaldson was an added bonus.

IMO there is no way Cashman is going to admit the mistake and bench IFK now. Most GMs don't have that kind of money to waste or the job security to die on that hill. But when you're GM for Life and the owner doesn't care about anything but season ticket sales and TV ratings the rules are different.
Donaldson over the last 14 games:
adamg : 9/26/2022 5:12 pm : link
.302/.397/.491
.
arcarsenal : 9/26/2022 5:13 pm : link
You just knew Peraza was going right back to the bench after last night. Literally can't even hit his way into AB's because this team has a bizarre fixation with IKF where his results simply do not matter.

Even at his worst points, he's just never been in jeopardy of losing significant PT.

Blows the mind. I can understand a degree of stubbornness with a player like Donaldson because he's been a league MVP in the past and has a track record as a quality player. But, who the fuck is IKF? God forbid he takes a seat for a bit.
It’s funny they make sure to trot Cabrera out there everyday but
Jim in Hoboken : 9/26/2022 5:46 pm : link
can’t find Peraza playing time. Most people would take a look at the lot and pencil in Peraza af SS, Volpe at 2B, and Cabrera at 3B at some point next year.

Not the Yanks!!! Of course, these are the same people that insisted ln playing Torres at SS for a year and a half too long.

I know there is another thread on Cabrera, but I hope he doesn’t
Jim in Hoboken : 9/26/2022 5:53 pm : link
fizzle out like most Yankees prospects. He was 145 lbs until he packed on weight during the pandemic and had that big power output at AA. He was voted the best defensive 3B in his league that year too.

He looks the part, just put him at LF or 3B and see if he flourishes. See which of Sweeney or Dominguez bursts onto the scene next year and situate him accordingly. I have high hopes that he will be more than an utility guy. Like I said, Cano 2.0 hopefully without the juice.
.
arcarsenal : 9/26/2022 5:57 pm : link
I remember there was some surprise when Cabrera got the call first over Peraza, but I think it's evident why that happened now. Waldo was more than ready to play in the majors, and his glove is just so good that you can get him in the lineup almost every single night.

That said, there's nothing I've seen from Peraza that suggests he's *not* ready.

In fact, I think it's pretty impressive that he's been able to come off the bench after several days of not starting and put a pair of hits on the board. There's just this bizarre insistence on making sure IKF gets his consistent playing time which I can't understand. The Yankees treat IKF like they signed Carlos Correa.

It would really behoove them to get Peraza more reps these last handful of games. He can be a factor in October if they'll give him the chance.
Geezus, Peraza played last night
section125 : 9/26/2022 6:21 pm : link
to give Donaldson a break. IKF is not getting benched for Peraza this year. Just get it out of your heads. And next year IKF does not have the power to play at 3rd base on a regular basis.
I doubt he is on the postseason roster when it goes back to 26 players. He and one pitcher will be sitting.

I know the Yankees aren't going to bench IKF or make it more of a split with Peraza, but we're fans and if we don't bitch about things we don't like, there won't be much to talk about. I just don't agree with the approach and am mystified by the seemingly infinite leash IKF wound up getting this season.

These guys are all locks:

So, three of those guys are going to be left off. I'm inclined to think they're going to carry Marwin, even though I think Cabrera mostly makes him redundant and unnecessary.

Carpenter is out of the boot and seems like he has a real shot of getting back.

DJ and Benintendi truly seem like 50/50 cases at this point.

But, yeah... I can see Peraza getting left off, which will suck. But there's going to be a crunch.
IKF and Donaldson have the
section125 : 9/26/2022 6:48 pm : link
highest fielding percentage on the left side in baseball, I believe. We can say IKF got some errors called hits, but if you watched the games, other teams were doing the same with their fielders..Hey I am not a big IKF fan, but he seems to get big hits late in games with RISP.

As far as the utility guy, right now Cabrera over Gonzalez. He has the better bat. Not sure DJLM, Benintendi or Carpenter will be ready for ALDS which means Hicks is on the roster. I'd gladly swap Benintendi for Hicks.
Locastro has a shot
shyster : 9/26/2022 6:57 pm : link
as the designated late inning pinch runner/base stealer.

He showed his value last Thurs night vs Red Sox.

Need bigger binders for an obvious decision like that. I don’t give a shit how cold Vlad is or what Alejandro Kirk is hitting. Walk Vlad!!!!!!!!!!!

He should be in the no trust zone at this point.
He is not ready for prime time.