Find some patience or you're going to be constantly miserable while development takes place.
LOL
Eric from BBI : Admin : 9/27/2022 11:50 am : link
Everyone on this site was thrilled with the Giants draft a few months ago. Even the national media was giving the Giants A+s for their first two picks.

A number of the later round picks have been pushing for starting and/or top reserve time, including two on IR right now.

No one expected Neal to come in and not struggle. Thibodeaux missed almost of camp and the preseason.


From a fan perspective, the worst thing for the team was to win its first two games. It knocked all sense of reason out of half the fan base.
I'd like to remind everyone
allstarjim : 9/27/2022 11:53 am : link
Whose been lauding the Cowboys' drafting ability that the top two players overall on their draft board was Thibs and Neal.

I have a high degree of confidence that Neal, at minimum, has a high floor as an NFL tackle

Outside of Love, McKinney, Jackson, Thomas and Saquon there is not too much talent on this roster.
So much stupid here
RCPhoenix : 9/27/2022 11:55 am : link
Also - apparently the team that just won last night thought highly of our first two picks... 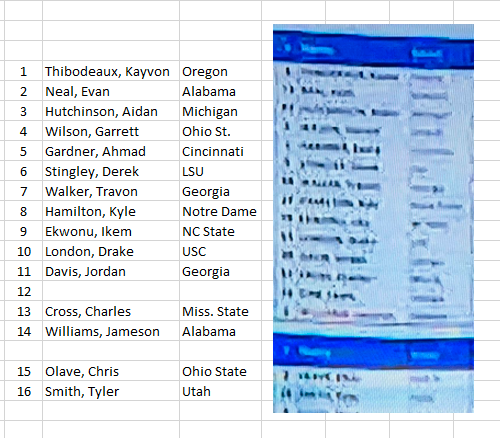 Eric's right, the 2-0 start went to many heads.
I
jtfuoco : 9/27/2022 11:57 am : link
Love how they manage thier timeouts the most especially the second half it's why they have been getting shots to win/tie up these games in the end. The beat example the coaching staff not challenging that late close catch on 4th down he didn't want you lose a TO on a gamble.
Some of you guys work yourself up into a froth
Ten Ton Hammer : 9/27/2022 11:58 am : link
over two wins, and that radically changes your expectations, and now all of a sudden everything is a disappointment.

You've watched football before, why are you acting like you havent.
Some of the later picks
Lines of Scrimmage : 9/27/2022 12:00 pm : link
have made positive contributions. Neal and Thibs need to be a big part of the future and I think they will be.

Give it some time. Repost next year if the results aren't showing where you can make a better position on this.
meh
monstercoo : 9/27/2022 12:02 pm : link
Personally, I feel like any GM would've made the Thibodeaux and Neal picks. In KT's defense, it was his first game and he's coming off an injury. Neal will take longer to develop... we'll know next year.

I'm very critical of the Robinson pick though. I think there was clearly better talent available and more importantly he wasn't providing depth where we needed it in 2022. Instead of drafting another slot receiver, they should've been looking to replace the roles Golladay/Slayton play.
I’m more upset about Parsons on Dallas
Sean : 9/27/2022 12:02 pm : link
But hey, we’ve got Kadarius Toney!
RE: I’m more upset about Parsons on Dallas
JonC : 9/27/2022 12:03 pm : link
In comment 15834877 Sean said:


They have always been dumb - or at least as dumb as any other fan base. They are just more vocal about it now.


It is pretty annoying the way some people act here. First off during the week all you hear is wins aren't the point it is a rebuild, this roster sucks etc. Then the game happens and they are bashing this play, that call, Jones sucks, we should be playing Taylor, get OBJ in here etc, because we aren't handily (games 1 & 2) and lost last night..

Last night a few huge things worked against Neal and our Oline as a whole.

1) Any semblance of quick strike, down field attack was eliminated before the game ever started with Robinson and Toney both not playing. We had no zip, no quick strike capability at WR position.
2) Dallas's defense is pretty damn good. How good? The Cowboys have scored 46 points in 3 games and 23 of those came against us. yet, they are 2-1. They haven't allowed more than 19 points in a single game and their opponents were the Bucs, Bengals and Us. Of that group, we were the worst offensive team and skill group they faced.
3) Micah Parsons is so good the Gmen did all they could to eliminate that threat but in doing so exposed Neal to Lawrence who is a heck of a pass rusher. Again, Dallas's defense is pretty good and when you a super talent on the field, teams have to over play him and it allows others to shine.
4) It is a team game and our offense is a buffet filled with one option, mashed potatoes. You can dress them up some, add some butter, salt pepper, maybe a cheese topping or whatever but ultimately it is what it is. Because Dallas didn't have to fear being attacked deep or quickly down the field they could pin their ears back and come after Jones. Two opposite things can be true without taking each other way- Jones played and amazing game -for him, but his lack of true passing talent and throwing guys open along with guys who need picture perfect passes to catch them makes the defense not worry of the few "highlight" plays Jones may make. Truly he is a guy who could thrive with a really good team and great all around talent- like a Jimmy G or Alex Smith (maybe Tannehill) but he isn't winning games on his own. That means the Oline is at risk even further.
4) Our WR's are the worst group in the NFL -again and it is not close. Sils shouldn't be starting and really should be WR 4, WR 5 on most teams.

Anyone who thinks the Oline was putrid has zero idea on what all plays into that. Dallas, with Cooper Rush, beat us offensively because we couldn't get to the QB because to do so means we have to blitz and disguise blitzes which leaves guys like Brown (a good player by the way), Lamb, Pollard, Ferguson (their TE's beat us no matter who it is) in very favorable matchups. Once they got their running game going we were now vulnerable to the play action pass. Our offense presented none of that to the Dallas defense. They had ZERO worries about our group.
I was hoping this new coaching staff would do better with using
Jack Stroud : 9/27/2022 12:11 pm : link
the TE in the offense and how to better defense the TE, it appears nothing has changed when it comes to the TE's! The Giants had the cowturds TE's looking like the second coming of Jason Witten!
2 wins may have been the worst for this team
nygiants16 : 9/27/2022 12:13 pm : link
I literally said this friend last night leaving the game, this team has a ton of holes, right now its house mpney, yeah it was fun to have an excited building again for a game but this season is about evaluation and thats it, if they win grest, if they lose ok cool..

If this team had SB aspirations then last night would of been a terrible loss..

You have to evaluate a team on where they at in a rebuild, not after a couple of wins and then you change everything. The team is still in a complete rebuild, hasnt even really started
my issues with this past draft had more to do with
AG5686 : 9/27/2022 12:16 pm : link
our picks in rds 2-4
but lets give it all a chance to play out
This thread is hilarious
Dave on the UWS : 9/27/2022 12:20 pm : link
From a pathetic point of view. JFC, dos we lose 40-0? They weee LEADING with 20 min to go in the game. Dallas raised their intensity level and sense of urgency and the Giants didn’t. It ended up a one score loss.
Most of us wanted competitive football this year. Well, that’s 3 competitive games and they managed to win 2.
There’s a shot ton more that has to be done with this roster. The people in the building know this. We should too (although based on what I’m reading this morning, I guess not.
I am not the least bit worried about Neal or Thibs
PatersonPlank : 9/27/2022 12:23 pm : link
Neal is going to be a force by the end of the season. Look who he has played against so far, what a trial by fire. Thibs will figure it out. 21 yr old guys need a little time.
RE: RE: nothing like BBI after a loss
Mark from Jersey : 9/27/2022 12:25 pm : link
In comment 15834829 Eric from BBI said:
yes it did.
We are lacking talent all over this team
bradshaw44 : 9/27/2022 12:42 pm : link
Be happy we are 2-1. The coaching is a breath of fresh air on both sides of the ball. If we had talent it would be even better.

Offseason we need 2 WR, OC, OG. Those are paramount. However they come we need them.

Just be happy we aren't already out of contention in week 3. Or like last year Thursday of week freakin 2!!!
Thibodeaux
mittenedman : 9/27/2022 12:43 pm : link
missed practice time, but what was concerning to me was the lack of burst.


Remember that old fable about Giant fans being very knowledgeable, well that group either died off or it was just something us NYers like to tell ourselves about how smart we are.
RE: RE: RE: LOL
islander1 : 9/27/2022 1:30 pm : link
In comment 15835216 Walker Gillette said:


I don't get people complaining right now. Who the hell thought this team was going to compete this year? The coaching staff should be commended for making this awful roster competitive.

There are at least 8 starters right now that will most likely be different next season. The Giants are still working through the garbage that DG left them with.
The questionable pick is WanDale
Snablats : 9/27/2022 1:57 pm : link
but clearly he was targeted because Toney wont play and the new regime knows it, and Daboll feels he needs that type of guy for his offense


Agreed about the Robinson point. Also, concerned about Flott for the long term but time will tell
Neal
armstead98 : 9/27/2022 3:51 pm : link
I was hoping he’s look a little better by now but he’s going up against some great players. Doesn’t mean I’m concerned about him, he needs a year of playing time, an offseason to get stronger and to work on technique.

I still expect him to be a top 5 RT when it’s all said and done.

Can’t grade Thibs at all coming off an injury.