Q: How did it feel health-wise for you on Sunday?

A: I would say as far as my health it was a win. Being able to go through a whole game and execute.

Q: What was missing from your game? An explosion?

A: No, I feel like it was a pretty good game given the circumstances of the situation and how the game was actually played. So, I don't think anything's really missing. As far as the team I feel like we could've executed at a higher level in the run defense. I think that kind of got away from us. Individually, I feel like I could've executed more but health-wise I feel confident in being able to deliver on the field.

Q: When you go into a game like this, this weekend and you look at their offense their really not putting the ball up a lot. Fewer 'at bats' per se in the pass rush, does that make you treat them as a premium if you hadn't already to try to get after the quarterback and get some pressure?

A: I think every game when you look at it it's about stopping the run. Once you can turn it into a drop-back game you have the advantage. So, given that we gave up a lot of run yards last game, we're really focusing on stopping the run and we're going to harp on making sure we have good fits, good technique, and play true to our fundamentals.

Q: You knew you were on some sort of a pitch count last week, right?

Q: And that was pretty much the way you thought it would go?

A: Yeah, we stick to the script. It was unfortunate, I was okay with the circumstances because it's about getting you back in, making sure I'm healthy but I definitely wanted to go out there and contribute a little.

Q: Do you hope that you have a bigger role in the script this week?

A: Definitely. You always want to hope that you're available to be in the game. So, I hope that I'm able to be ready when it's time.

Q: Did you learn anything from your NFL debut? Speed, Monday Night Football, just welcome to the NFL.

Q: Have they told you that you're not going to be on a snap limit this week?

A: I wouldn't say playing it by ear, but I don't think I've really got an update on the plan as far as pitch count or not pitch count. But yeah, we're definitely going to continue to progress as I progress.

Q: How different is that 'not superman' mentality? In college and high school, you can really turn it on and be the dominant force.

Q: Given who you think you are, does that benefit you? If it's bigger, if it's more schemes, you think you're that kind of player too, right?

A: I would say for me, I break down the film and I get everything that I can but then in the game you've got to remember, not only do I have to react to the offense but then we have coaches. For example, you're starting quarterback goes out, you've got to change it up based off of the players you have. Coaches are really good at playing to their team's strengths. Plug-in players and putting them in the right spots and making them shine. I think that's the part that's been my welcome to the NFL. These are guys that get paid to draw plays and to run them and execute them.

Q: There are guys that literally get paid to nullify what you're doing completely.

Q: How many times did you watch that 4th and 4 because it seemed like you were that slight second off from decking him.

Q: Yeah, when you went inside, the one that they completed right at the sticks.

A: Yeah, it's funny I actually only watched that one time. I didn't watch it again. That's why when you said 4th and 4, I had no idea. I would say that one is frustrating but that's the game. And that's where I tell you it's schemes, understanding, it's coaches. They knew that 4th and 4 I'm thinking pass, they know that. They know that we pressure so it's smart for them to get it out quickly and to play to their advantage. So, that was just great coaching and better execution.
I beg to differ
TommytheElephant : 9/29/2022 7:44 pm : link 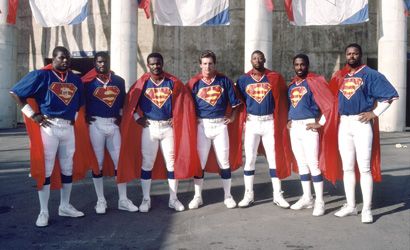 The white guy is Gary Reasons.

Hard to see all the faces in that photo, but I now think that Pepper Johnson is the guy at the far left.

Robbie Jones is a possibility for one of the other players pictured as well, and I may not have the order of the last two, but I think it's (from L to R)...