Anyone following this Brett Favre story?

SFGFNCGiantsFan : 9/30/2022 8:16 pm
His charity-Favre 4 Hope-donated almost $130K to the University of Southern Mississippi Athletic Foundation, where he went to school & where his daughter played volleyball. Apparently there are texts showing Favre pressuring Phil Bryant-a former governor of Mississippi-about building a new volleyball facility. Farve 4 Hope is a charity for breast cancer patients & disabled children. Needless to say, this is a misuse of funds.

The other part is that Favre's the leading investor in Odyssey Health, a company apparently doing cutting edge work developing a nasal spray for concussions. Sounds like a very worthwhile endeavor. However, it seems like state funds earmarked for welfare members were redirected to Odyssey.
There a lot of “questionable”
Dave on the UWS : 9/30/2022 8:50 pm : link
stuff here and Favre’s celebrity status is like the flame drawing the moths of the press. I’m betting there’s a lot more to come.
There have been other HOF players to go astray
thrunthrublue : 9/30/2022 8:50 pm : link
During and after their playing days…….judging their on the field performances, accomplishments, against any and all discrepancies, i think their superb talent, performance records…..rising above 99% of all others makes any negatives only attributable to these one per centers being also……merely humbling humans. And….sometimes, in their off the field affairs supremely dumb making more bad choices off the field, than on it.
I thought it was state funds that were diverted to the volleyball
Snablats : 9/30/2022 9:10 pm : link
facility, and that was the issue

Anyway, it doesn't look good for Favre, but if you had to make a case for him - he just asked for help in getting a volleyball court for his daughter.

Now, that's not illegal if the funds are coming from a place that supports that kind of thing. It's quite conceivable that Favre had no idea they were skimming off the top of welfare funds.

And his text about not wanting the press not wanting to find out could be attributed to the guy is a multi millionaire looking for taxpayer help, and Favre knew it would be framed that way.

Favre also paid all the money back apparently.

It was federal money that had been allocated to Mississippi. So had the money all been spent appropriately, it would have all been spent in Mississippi. I don't think any money was diverted from other states as a result of this fraud.
Diverting welfare funds for
mattlawson : 9/30/2022 10:29 pm : link
A fucking volleyball project is certainly controversial and worthy of a reaction. Shitty thing to do and he got caught doing it
Favre has always been a bit of a scumbag.
Dave in Hoboken : 9/30/2022 10:32 pm : link
.
Yes, this topic is very much in the news.
81_Great_Dane : 9/30/2022 11:05 pm : link
Favre’s radio show has been suspended because of it.

Because government money and officials are involved, any discussion tends to veer into politics.

For the same reason, Favre probably can’t just make restitution and walk. Laws were probably broken and the crimes were too public to sweep under the rug.

Favre was a terrific QB but he’s kind of a slimeball, huh?
The
DanMetroMan : 9/30/2022 11:23 pm : link
Million Dollar Man Ted Dibiase and his son are also involved in this somehow
Jets fans must be really embarrassed
trueblueinpw : 10/1/2022 12:01 am : link
Just such a lowlife.
It's both
larryflower37 : 10/1/2022 12:02 am : link
He used Welfare funds and used money from his charity which was promoted to help cancer patients and underprivileged kids to fund HS and college volleyball facilities. Which is a grey area if it's illegal or just unethical from a charity stand point but people thought the were giving for cancer and kids.
He also took personal payments from walfare money for speeches he never gave, which it sounds like he partially paid back.
RE: The
Optimus-NY : 10/1/2022 5:45 am : link
In comment 15839544 DanMetroMan said:

How on Earth...
BMac : 10/1/2022 8:08 am : link
...did the snowflakes not freak out over this thread?
Spent a lot of my professional
mfjmfj : 10/1/2022 8:50 am : link
life working with the ultra high net worth. People that are much richer than BF and got their money by their brains and not their brawn. Even if there is something illegal going on here that BF is in trouble for, the practical reality is that it is unlikely he had any idea he was doing something sketchy. He is watching football and commenting on it, not understanding the intricacies of what charitable fund can do what. Again he may be legally culpable, but in moral terms he is probably guilty of nothing more than being willing to use his name and position to get what he wants. Something pretty much all of us are guilty of.
Umm
Gary from The East End : Admin : 10/1/2022 8:54 am : link 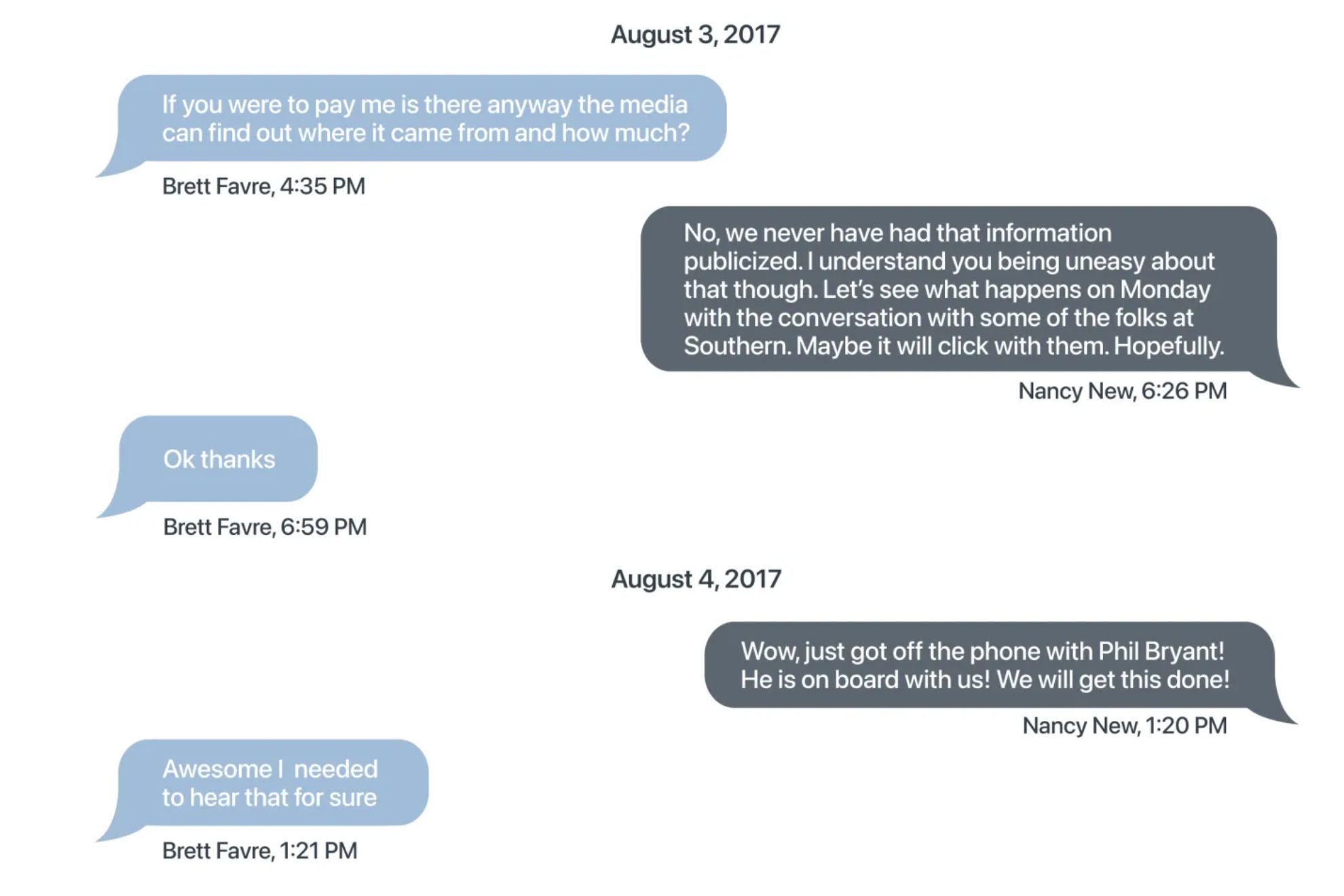 Shared without comment.
Full timeline of the scandal - ( New Window )
One bit of additional background…
Big Blue Blogger : 10/1/2022 9:27 am : link
… for those unfamiliar with the history of welfare reform: TANF is the federal program that replaced Aid to Families with Dependent Children (AFDC), better known as traditional Welfare. Unlike AFDC, TANF gives states wide discretion in the use of funds. Many states have stretched - some would say abused - this latitude, with Mississippi among the jurisdictions drawing severe criticism. The rejection rates for cash aid, mentioned in the linked timeline, are just one example of Mississippi interpreting TANF is ways that reroute money from poor families to politically-connected organizations.
I think he ends up in prison ....
short lease : 10/1/2022 10:07 am : link
apparently law enforcement has texts with the Gov ... and at 1 point Favre asks "Do you think we can get caught doing this?".

THe Governor texted back "No, don't worry about it"

I tried to care about this, but it's so boring and I guess I just assume it happens all the time, only instead of *just* politicians misappropriating funds and screwing the people who need them, this time it includes a famous athlete so it's newsworthy beyond the local level. I guess I just kind of view most politicians as professional money launderers.

I hope the truth comes out and people pay appropriately for their involvement, but on the scale of fucks given about something, this is low for me because I expect it - after trying to care more about it.
RE: Spent a lot of my professional
Big Blue Blogger : 10/1/2022 10:30 am : link
mfjmfj said:
Mfjmfj: I think you have it exactly backwards.

In “moral terms”, Favre is garbage and should burn in Hell. His own texts and actions make that much clear. No false equivalence with “Something pretty much all of us are guilty of” can diminish his utter crappiness.

The open question is the extent of his legal exposure. Maybe he’ll escape earthly consequences with expensive lawyers, fake penitence, and technicalities related to legal lobbying. He may already have missed his opportunity, since most of his co-conspirators collaborators have already cooperated. Maybe he can still sneak though a loophole, since he wasn’t a public official, doesn’t appear to have bribed anyone, and the misuse of funds by his own charity was relatively small. The whole thing looks like a conspiracy to defraud, but I’m not a lawyer and Favre will get the best representation and every possible break from the system..

His moral culpability, on the other hand, is already well-established.
agree
Lines of Scrimmage : 10/1/2022 10:32 am : link
with pjacs.
Pjcas18: I agree with your premises, but not your conclusion.
Big Blue Blogger : 10/1/2022 10:38 am : link
You’re right that corruption is routine, and that the attention to this case stems largely from the Favre connection; but when this kind of vileness does come to light, I think it’s important to name, shame, and punish the perpetrators. Otherwise, we’re just condoning it and encouraging more of the same.


Again, I think Favre is most likely guilty of knowing....heck, he took money for speeches he did not make lol

However, in regards to those Tweets, why would he be concerned with the media finding out over, say, law enforcement lol......??

Again, you could make the case he was actually more concerned with bad publicity rather than thinking he actually did something illegal....
Why would this get deleted?
RicFlair : 10/1/2022 10:48 am : link
What’s political about it?

Favre is a scumbag.


I'm not saying not to name, shame and punish - absolutely do that. should be bare minimum. I'm just saying my level of outrage won't force me to get beyond the headlines


Couldn't agree more. If it was Brett Favor, this would get a few paragraphs on page 8 of the Jackson Clarion-Ledger.


I'm not so sure about that in MS. It's huge news down there, despite Favre. In fact, the reporter on the case has done a fantastic job of reporting.

(3) There really is no evidence that Favre was aware the politician's would be pulling money from a "welfare fund." I think it is plausible Favre was just assuming he was getting some sort of government slush fund money.

(4) The money DID go to building a gymnasium at a public state university. Any money allegedly paid to Favre for "speeches or PSA's" went to the school/facility.

(5) The uproar that Favre's cancer foundation gave some money to a public university is way way overblown. I work intimately with several pro athlete foundations and know firsthand that most of the money raised goes towards paying for lavish "Galas" (they claim an event raised $1 mil but it cost $950k to host the party so they really raised $50k)

(6) Favre seemed to genuinely be hustling hard to get this facility built. He was reaching out to local contractors to get them to donate supplies and services. He was offering to do appearances for people in exchange for support. They entertained using a prisoner work program to help build the facility.

(7) We all know that money would have been wasted on something else and never made its way to people needing it.

(8) If anyone is "guilty" I think it would be the politicians and not Favre. Fraud requires "intent" and it does not seem like Favre "intended" to participate in a welfare funds scheme.

Overall, this is probably just basic "how things work" going on. It is not a scandal on par with something that would really "shock the conscious" as we say in the legal world.

Criminal intent - you have to prove beyond doubt. Again, I could make a case for Favre indeed wanted a facility built using govt money (aka not his money), but didn't know where the money was coming from.


Maybe it's overblown, but I don't think the uproar is due to Farve 4 Hope simply giving money to USM.