Agreed. People just automatically assume that every pass Golladay doesn't catch is his fault. Each has to instead be judged by itself.
RE: Golladay might be a bum, but that play is a microcosm why Jones
Thunderstruck27 : 11/13/2022 1:27 pm : link
In comment 15904047 Essex said:


Yes because all other QB's complete every single pass. Do you guys watch other QBs. Did Brady throw ever pass perfectly today? Also, Jones has thrown very well on the run this year, its a basic staple of their offense.

and his arms were outstretched, so it was impossible to catch it


It’s pretty clear he stopped the route. I don’t know what to tell you.

Bad penalty, bad decision to punt or at least take delay of game.


Based on his bottom 1/3 passing stats ; great coaching; and his low yard per attenmpt


Because Daboll lost his composure there for the first time all season and wanted to make an example of Jack anderson.
Great by Adoree
jpkmets : 11/13/2022 1:46 pm : link
Again. Nice first half for him.


Watching mid and late round guys like these excel always makes me wonder if re-signing Barkley to a large contract is wise.
...
SFGFNCGiantsFan : 11/13/2022 1:48 pm : link
Defense does a GREAT job keeping the opposing team out of the end zone.

Wasn’t even near the play. Wasn’t like he had to get out on a f***ing reach block. He was way out on the left with the QB sneak over the center.


If you’re gonna punt you need to try to take the delay there with our punter.


The route were terrible no short pass to secure a FG

They are keying so heavily on Barkley that lack of play action and/or a keeper by Jones is a huge mistake.

If they are not careful, they are going to wake up tomorrow at a press conference trying to explain why they lost to the fucking Texans.


+1.never a good look to destroy the easiest target on the sideline in front of everyone. He should focus on the game. He is doing a terrible job right now.
Not sure what is happening
jvm52106 : 11/13/2022 1:59 pm : link
Here but, for those that think Daboll is coaching around Jones, meaning the offense is limited on selection because of what he doesn't do well, this last drive might support that.


If he is coaching around Jones then he deserves to be fired. Whatever we are doing out there looks bush league.
I think Daboll is doing the right thing
PatersonPlank : 11/13/2022 2:01 pm : link
We should be pushing to blow them out, not just win. Its not ok, the urgency needs to be raised
Well, we’ve been good at halftime adjustments all year
jpkmets : 11/13/2022 2:01 pm : link
A lot need to be made today. That’s for sure.


Agree on the talent, disagree 1000% that this is not the play calling.


no, it absolutely is not the same and I am not going to spend the next 5 min detailing those differences to you. If you cannot see a difference in the play calling, then that is on you.


That was a perfect spot to have Jones keep the ball...


yeah it was the short side. They flooded the area with too many bodies and ran Jones to his left... as a right handed passer.


every play has a specific route tree and progression that has been established. If Jones sees the first option for that play wide open, that is where he is throwing it. That is what the coaches want him to do.
RE: The masochist in me wants to see DJ throw another ball to
Joey from GlenCove : 11/13/2022 2:27 pm : link
In comment 15904448 Anakim said:

Gaining on average 25 yards of field position vs 50/50 shot at first down and points? Yeh terrible decision, it’s not like we have Feahles back there.

One small adjustment to your equation:

This is a classic way to lose to a terrible team. Literally can’t get out of our own way.
RE: its a shame Golliday would have gone a long way
SomeFan : 11/13/2022 2:34 pm : link
In comment 15904505 Paulie Walnuts said:
I am sure he would have tripped over his shoelaces after running a yard or two.

2) Golladay at least was able to get open...hopefully the team psychologist works with him...
Golladay might need some sessions with the team psychologist.
Big Blue Blogger : 11/13/2022 2:36 pm : link
Diminished physical skills are one thing, but this situation is getting into Steve Sax/Chuck Knoblauch territory. Looks like a bad case of the "yips".
Ok, so that half was not what we wanted but
jvm52106 : 11/13/2022 2:36 pm : link
I think a few things changed can open things up a bit:

We need to run out of our standard formation more- meaning less jumbo where our options are SB or DJ run and that is it.

KG needs to sit, rest of the game and be let go come Monday..100% serious, his play isn't just struggles, he is a pure negative right now.

Our lack of TE's , Bellinger being out, is as big of a problem as is our Wideout issue. We have nothing at TE right now.

The defense played well. Aside from one run, they contained Pierce, and regularly pressured Mills.

The offense is way too predictable, especially all those first down runs by Barkley. Our only pass play of note was to a wide open Slayton.

Gillan can't punt inside the 20 and shanked another.

The mistakes include jumping offsides, a horrendous drop by Golladay, and nearly being hit twice by the ball on PRs.

We could easily lose this game.

Joe Schoen (who I like very much) who everyone acts like he can’t do anything wrong and is beyond criticism, gave the Eagles Bradberry and traded Toney for a 3rd round conditional. Yeah, I know there were some other factors, but the point is to make your team better and your opponents worse
RE: RE: We
AcidTest : 11/13/2022 2:42 pm : link
In comment 15904536 Thunderstruck27 said:


Amazing that he even got it off.
...
SFGFNCGiantsFan : 11/13/2022 2:46 pm : link
Art Stapleton
@art_stapleton
·
4m
Kenny Golladay not in the lineup to begin the third quarter. Giants WR: Isaiah Hodgins, Wan'Dale Robinson and Darius Slayton.


Did you see the rush? Jeez man he did a great job just getting the ball out.

We started with five consecutive runs to Barkley. This isn't just that Houston has the worst run defense in the league. It's that Daboll and Kafka have no confidence in our WRs and TEs.
RE: Not sure why Slayton was buried in the depth chart
Thunderstruck27 : 11/13/2022 2:49 pm : link
In comment 15904587 Sean said: 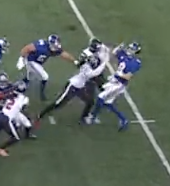 Need to get at least a FG on this possession.
That was pathetic
Bramton1 : 11/13/2022 2:59 pm : link
Defense has dominated all day. We get a larger cushion on the scoreboard, and the defense just decided to take the next drive off?


That was nearly as bad as those Eli misses where the WR had two routes to choose and ran the wrong one!


Inactive or Injured Reserve next
Jones giving you the good and the bad in this quarter
BigBlue565358 : 11/13/2022 3:09 pm : link
great throw for the TD, bad miss on Slayton, perfect throw to the right man for the long 1st down


Was that throw to hodgkins better enough for you??


I guess you missed the part where this team is about to be 7-2?

But sure, let’s rebuild again and draft another QB with a low pick that has a minuscule chance at being as good as Jones is.


Yeh I was thinking same thing.


I'm with you. You can win with Jones. If we luck into a Patrick Mahmoes like situation (good QB prospect available where we pick) in the upcoming years you do it but people need to stop act like Jones isn't good enough to be a starter.
That was an impressive screen pass by the Texans...
DefenseWins : 11/13/2022 3:17 pm : link
looked like 7 of our defenders got fooled and were chasing the QB
Ahhhh come on D
jpkmets : 11/13/2022 3:17 pm : link
!

Game will be won by Giants offense.


Minuscule chance ? Lol. So that is new party line ? Jones is a what 21 st ranked qb at best ? I hardly call that a Minisxuke chance.

Simple amazing !! I cannot renember in the history of my sport franchises there being a more mediocre player that had suck a following and considered untouchable status.


Gotta remember he’s still a rookie. I’m just glad he’s making the plays he does and the ones he’s missed, haven’t killed us..


That is what I was trying to say earlier, but Ray Charles was telling me it looks the same as our other games.
Uninspired playcalling there
jpkmets : 11/13/2022 3:24 pm : link
After the to. Felt content to punt and any first down is a bonus.


Well then, I have no idea what games you are fucking watching, but it sure isn’t Giants games. This is filled with so much stupid that I’ll just let it go. Hope your day gets better.

On that 25 yard pass, they were holding #5 with a literal hand on the front of his abdomen and it was so obvious right in front of the refs.


I don’t think it’s all luck when you a) force a fumble and b) force a compromised throw with pressure..

Already addressed this. Since its the 2nd straight game this happened, it seems they are hiding those plays to bring them out later in the season - like vs Dallas and Philly
RE: Kafka playcalling sucks ass the last 2 games
Simms11 : 11/13/2022 3:43 pm : link
In comment 15904986 Giantfan21 said:


The idiots are out in full force tonight ..

Going into the season you expected wins against the Titans, Packers and Ravens?

Bottom line is you can only play who is on your schedule and if you expected more from this team this year I’d say you’re full of it.

Going into the season you expected wins against the Titans, Packers and Ravens?

Bottom line is you can only play who is on your schedule and if you expected more from this team this year I’d say you’re full of it.


Your thread is STILL INVALID

Green Bay and Baltimore are not Subpar


Ummm, i guess you missed when KT stood up the back to allow LW to strip the ball.


Davis Mills is “significantly better” than Daniel Jones, according to Mike in NY. From the season prediction thread.


because he had two defenders between himself and the first down mark. He would not have reached it
This si why im upset with Kafka conservative
Giantfan21 : 11/13/2022 4:07 pm : link
play calling. In stead of going for the kill they had to rely on turnovers from the defense and a long Fg to win the game when if he was a a little more aggresive game could have been over a while ago
RE: How do we have ALL those OL out there
Simms11 : 11/13/2022 4:07 pm : link
In comment 15905140 GiantSteps said:

Have you watched this team the past several seasons?


I guess you missed the two TD passes. Including one for 54 yards.

But yes, the focus of the offense was correctly on running the ball, given how awful HOU is at defending it.

Like the coaches preach….just go 1-0 this week. I really don’t care what it looks like as long as we keep piling up those W’s,

I was hoping we’d have this record next year and as far as I’m concerned we’re a year ahead of schedule. Any win no matter what it looks like is a huge plus and with the way the NFC is shaping up, puts us in great shape to make the playoffs. Something I never even thought about coming in.I just wanted the arrow pointing up.

All the coaches and players deserve a huge tip of the cap and any benefit of the doubt. I don’t care about style points, just get W’s.
Fuck off
Route 9 : 11/13/2022 4:28 pm : link
The Texans didn't play a bad game. There is no easy win in the NFL and they were tough.