NFT: It's the Knicks "don't suck" Knicks thread of the day

Semipro Lineman : 11/17/2022 6:00 am
This is the thread for "real" Knicks fans and not the pretenders in the other thread who want to trade and fire anyone who even works nears MSG including the cashier at the pizza place across the street. 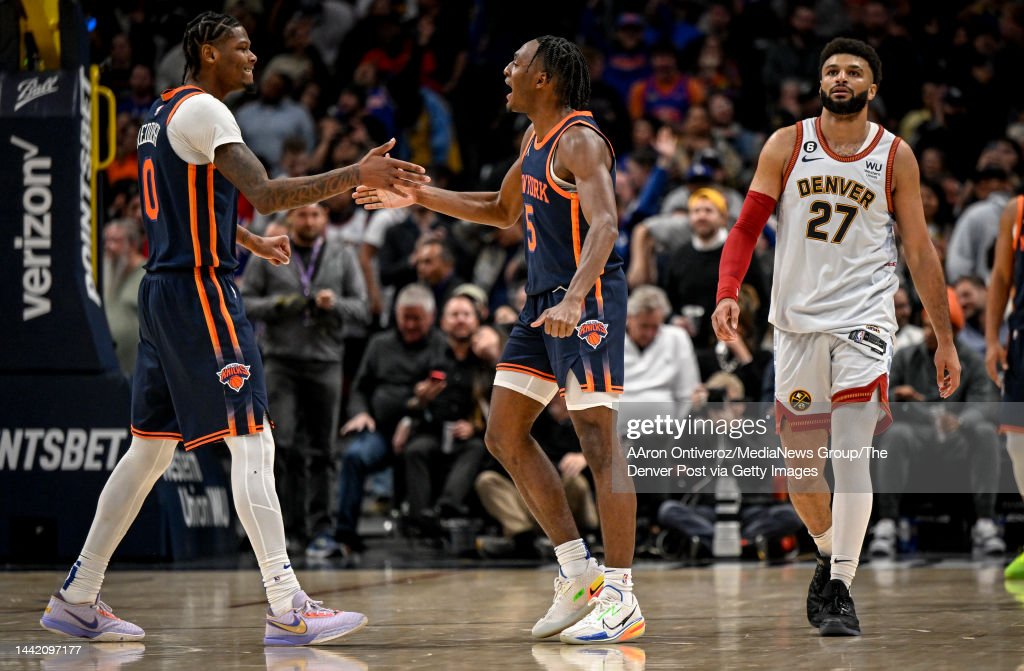 Damn, we got a good team this year and it's only going to get better

You cant continue to have games where you go 8 for 18 and score 19 or 20 points..
I would argue RJ
larryflower37 : 11/17/2022 11:43 am : link
should take 80% of those shots, he was wide open from 3' all night and he had no lift but if you are out there and get clean shots you have to take them.
My problem is he shouldn't have been out there, but we beat the Thibs substitution problems to death and this is a positive thread for the real fans...so I will decline to discuss it.
Nah, I mean I don't know...
Jan in DC : 11/17/2022 11:56 am : link
He might be an all-star one day, but at this point I doubt it. But we all know where he has to improve. Finishing, playmaking, smarter decisions when he penetrates, better shooting. By all accounts he works hard, so maybe something clicks, but at this point, I'm not holding my breath.

I am not sure how you can say he's the same player he was when he came into the league. He's a better shooter, he gets to the line more, he's better defensively.

I do think he's a bad fit with Randle, so that's something to consider.


we can do this with dozens of greats that needed 2-3-4-5 years to emerge as a true star.

Daniel Jones was never going to improve in year 4 either. Let's line up the experts who screamed that crap from the hilltops every day around here.

Jimmy Butler. There's one. Should I keep going?

I don't even want to get into it--RJB might be what he is, a tough, 2 way player who can avg 18-20 and sometimes be erratic. Ok...deal with it. Or maybe he turns into a mega star...unlikely sure, but don't tell anything with a 22 year old is a certainty. Save it.


I am not trying to argue with you, but is he really a better shooter?

and its not just 1 game, its been like this for pretty much all year, he had a good 5 or 6 game stretch and then went right back..

and is he really much better? he averages 4 more points but takes 3 more shots, his shooting percentage is the same, 3 point is much worse, he goes to the free throw line .5 times more than his rookie year and efg% is still terrible..


Stop it, please name the superstar that took 4 or 5 years to develop..


my point is you saw something early, with 99% of stars in this league you see it early, it make take them a 3 or 4 years to make their mark but you see it earlier than that..

He will never be a top ten player because he lacks quickness and hops and is not a great jump shooter.


Just about to post this lol, According to stein he thinks a deal is getting close for Crowder, not necassarily to Knicks but in general..

well SGA has never been made available as far as anyone knows...right? But between Murray and Mitchell I'm taking Mitchell. Mitchell is under team control for longer and is more likely to extend his deal (due to cap rules) while still under contract. Murray is almost certainly getting to unrestricted free agency.
RE: Barrett is going to score 25 ppg
TyreeHelmet : 11/17/2022 5:13 pm : link
In comment 15911006 Vanzetti said:


You think Barrett will score 25PPG? In what league?

And he is about the furthest thing from a natural scorer I've ever seen.

He's clearly a good guy but he's been a disappointment overall for the Knicks. And this is not just looking at him this season- this is the totality of his nba career.
I'm tired of watching shooting nights like that for RJ
NoGainDayne : 11/17/2022 5:26 pm : link
I disagree with the idea that if you have open looks you take them. Maybe you should be looking to do something else than post up at the 3 point line if you are shooting that badly.

And the team has a lot of depth, if he is going to be shooting that poorly he shouldn't be on the floor period. He was a -18 last night and the next worst player was Hartenstein at -6. He's 40.2% from the field and was 40.8% last year. That simply is not good enough for the amount of shots he wants to take. That makes him 31st among SGs and 59 among guards this season. You can call him a glue guy all you want, that's fine, he shouldn't be shooting as much as he does.
Barrett has a bug/flu so I'll give him a pass for these past couple
steve in ky : 11/17/2022 5:31 pm : link
of games because it's obvious he's labored a little being asked to play through it. It's more on the coach for not spelling him a little more, but Thibbs just benched a couple guys and went to this 9 man rotation so I can also understand him not wanting to reverse that immediately.That just complicates things. The bottom line is they are playing better and winning some tough games on the road, hard to complain about that.
RE: I'm tired of watching shooting nights like that for RJ
steve in ky : 11/17/2022 5:40 pm : link
In comment 15911402 NoGainDayne said:

If you are hot, attack by all means go nuts, but if your off, do other things, move the ball, rebound and defend, dont force shots, you dont need to on this team..


It is frustrating to see him keep shooting three's when it's appears he is too under the weather to be effective. What we don't know, and I'm curious of, is what the coaches are telling him to do. Maybe they are telling him if you're open and the ball gets kicked out to you keep shooting.
RE: RE: I just want Rj to play smarter
nygiants16 : 11/17/2022 5:57 pm : link
In comment 15911427 steve in ky said:


I dont mind those shots if you are wide open you got to take the shot, but i saw a few times where a guy was rotating to him and either had Randle or cam or Brunson open and all he had to do was swing it but instead took the shot..

I am not going to kill him for missing iq at the end of the 1st quarter, i dont think he saw him
The plays that bothers me the most
nygiants16 : 11/17/2022 5:59 pm : link
is he will drive and the defender in the corner will slide in leaving the corner man wide open and instead of the easy kick he shoots off balance floater/runner..