It's the European way. I see it EVERY week in the EPL and La Liga.

If we're 2nd in this group and get through to the 2nd round then we play the 1st place finisher in Group D. France is the obvious favorite in that group. Whoever finishes 2nd in Group B is likely in for a monumental task in the next round.

Second half you could see the US was tiring and Berhalter didn't sub early enough to stem the tide and structure. Zimmerman made a stupid challenge. When you don't get the win, all the little things matter.

There does need to be some discussion of how to protect Pulisic. No one in the US squad has the protector gravitas.
RE: You chalk it up to immaturity across the board.
Optimus-NY : 11/21/2022 4:17 pm : link
In comment 15917203 Bobby Humphrey's Earpad said:


This game needed a little bit of Gio Reyna unfortunately. But without a real striker, the pieces don't seem to fit well enough.
When a Tie is a Loss
Jeffrey : 11/21/2022 4:20 pm : link
Whether by design or not the US completely changed tactics in the second half after total domination in the first half. Put that on the coach because teams that play to protect a lead often blow the game. Some random thoughts from my chair:

Still lacking a real striker on this team. Noticed Sargent dropping too deep to get involved in the play rather than staying up top and providing a target. Wright had no impact.

Tyler Adams is by far the US best player and most consistent.

Pulisic does what he does best--attacking from wide position and creating chances and what he does poorly--terrible set pieces. Been waiting for someone else to be given a shot but seems unlikely. Terribly inconsistent officiating but Pulisic and others need to stop whining as it does not work with professional referees.

Weah is a beast on the ball but too often the attack was down the left side and he was not involved.

Left back is still a problem for the US with Dest often out of position andscrambling to get back and Yedlin not an attacking option at all.

McKennie and Musah leaving the game hurt but both must be injured.

Aaronson did not have the same impact in terms of size or strength as McKennie and Acosta is not close to the threat of Musah.

Ream did great and Zimmerman has played long enough now to know that his unnecessary mistake--and it was a clear foul--may ultimately send the Americans home early.

This was the result that I expected but could have easily been avoided had the team not become so timid up top and in the midfield in the second half. So now it comes down to goal differential as to who loses by the least to England and who can beat Iran by the most. I am not betting on the US as their players looked totally wasted in the second half and some are injured or playing on a yellow which makes it hard to go full steam.
Disappointing result
Sean : 11/21/2022 4:21 pm : link
.
RE: When a Tie is a Loss
thefan : 11/21/2022 4:25 pm : link
In comment 15917216 Jeffrey said:


Seems to a layman here that Wales adjusted well in the second half and stopped playing not to get beat. Had Wales played like that the entire game I am not sure we could've won. I guess Wales feared the US counter in the first half? 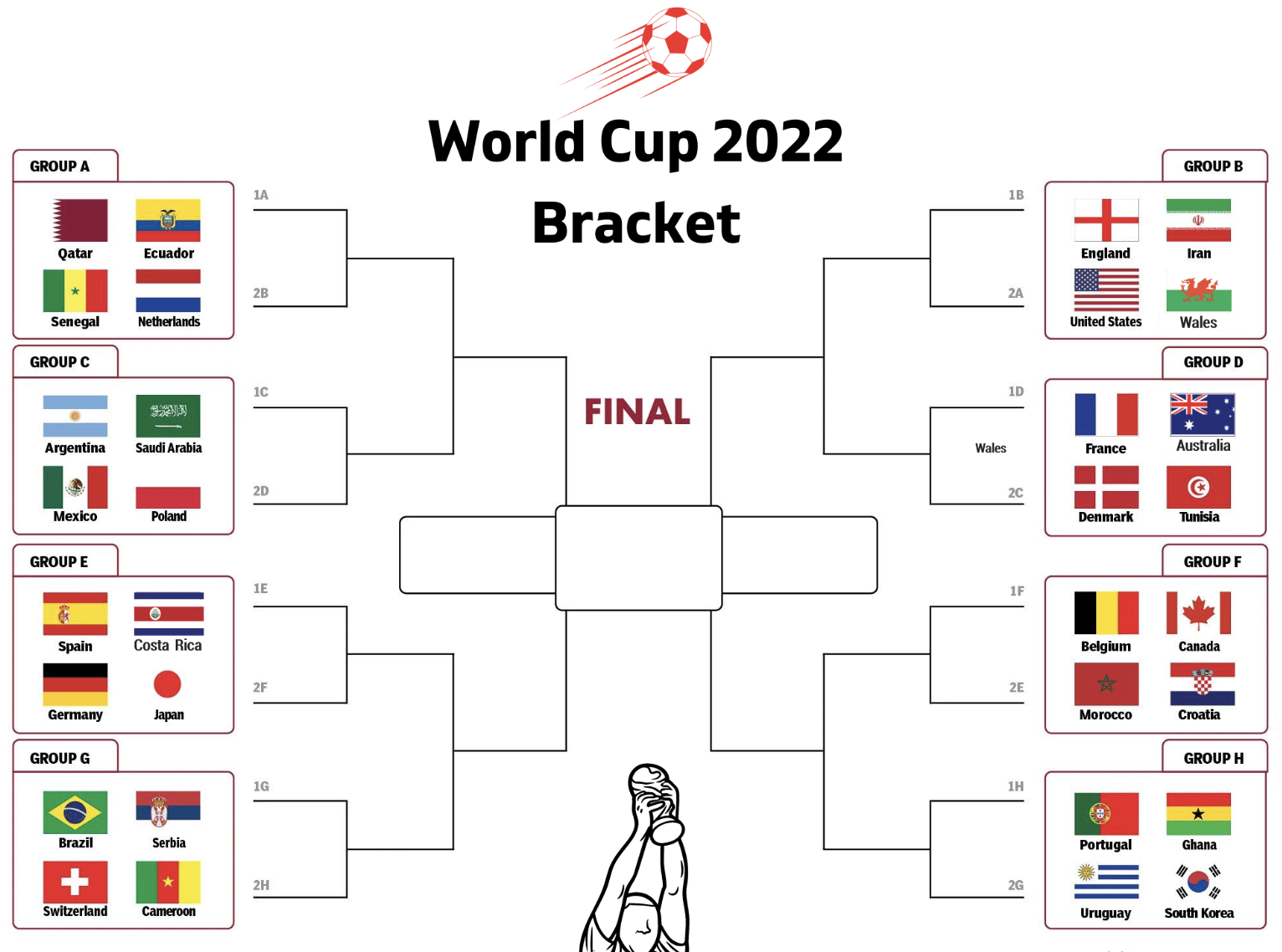 
Excellent analysis. At least one of the announcers was questioning why Reyna didn't play. I thought we'd have some counterattacking opportunities in the second half as Wales started to press forward but the lack of a real finishing striker meant that even when we did, we couldn't capitalize. We have very little on offense.
If I'm reading that bracket right,
Metnut : 11/21/2022 4:27 pm : link
it's 1A vs 2B in the round of 16? That wouldn't be the worst group to face.
RE: If I'm reading that bracket right,
Optimus-NY : 11/21/2022 4:29 pm : link
In comment 15917230 Metnut said:

I thought the ref was a bit too quick with the yellow cards, but if that's what's needed to try to keep control of the game it's not so bad.


I really don't think that the US was playing for a tie. I think they looked like a young team that was trying to protect a lead and something the coaches have to prevent. The crisp passing was completely missing to begin the second half and the US players were not putting together the combinations they did in the first half for the better part of the first 25 minutes of the second half. After that they played better but still looked tired and slow and several times the ball was just cleared out of the back rather than making an effort to play on the front foot. I am as frustrated as anyone by what I think was an unnecessary loss--I mean tie-- but it is not shocking given the youth of this team.

The problem now is that England is an entirely different type of animal than Wales and the US will have to play a more defensive game. If they beat the US, England could and should likely rest many of their star players in the Wales match to be fresh for the next round. This will give Wales an advantage in the goal differential battle that appears likely unless Iran can pull a stunner. Iran is ranked 20th and Wales 19th so anything is possible in what will be a home game for Iran. However, that will require an entirely different Iran to show up than we saw today.
RE: RE: RE: Pulisic needs to quit
PatersonPlank : 11/21/2022 4:58 pm : link
In comment 15917261 Jeffrey said:


"If they beat the US, England could and should likely rest many of their star players in the Wales match to be fresh for the next round."

Combine this with the fact that Wales are sort of "bretheren" to England, and this could be a bad scenario. England resting players and not being to upset with a Wales draw, is a bad place for the US to be.
The positives going forward
Jerry in_DC : 11/21/2022 5:01 pm : link
- We have some game. We made Wales look pathetic in the 1st half.
- Wales don't look like they have a ton of goals in them. I don't see them lighting up Iran
- England is not laying down for Wales. Even if they play all their subs, they are going to go super hard

Despite all that, massive disappointment in the 2nd half. We just needed to control the ball and not make a mistake on D. Couldn't do that to see it out. We definitely got nervous/tired, which is to be expected from a young team, but massively frustrating nonetheless. We were real close to having a huge advantage. Now it's a complete dogfight.


To be clear I do not expect England to lay down for Wales, but it would be coaching malpractice (something Southgate is capable of) for England not to rest their stars if they have already clinched the first position after the US game. Realistically this young and talented US squad is here to advance to the next round and gain valuable experience. England is here to win the World Cup.
Several observations
Rick in Dallas : 11/21/2022 5:36 pm : link
Dest was played out of position.
Pulisic was terrible on set piece deliveries which use to be a USMNT strength.
Tyler Adams played a terrific game as did Robinson.
We stopped attacking in second half. Tried to counter attack Wales.
When was the last time we had a true striker. Has been a weakness for years
Is Reyna injured?
Stupid penalty by Zimmerman on Bales with his back to the goal. Just needed to stand him up.
Truth be told we were lucky to get a draw. Moore should have buried that header.
England is going to dominate us in the midfield Friday
Iran could beat or tie Wales, over 50% on betting sites
schabadoo : 11/21/2022 6:37 pm : link
England's subs, from what I've heard, are not much of a dropoff.

That's the optimistic take.
As poorly as we played in the second half, the result
CT Charlie : 11/21/2022 7:11 pm : link
came down to one ugly blunder, the kind of foul that a high school player shouldn't make. Bale is a phenomenal player, but unlike other world-class strikers, he's not much of a threat to work magic with his back to the goal.