i doubt we play uptempo. cause dallas can score quick.

we are going to TRY to limit their offensive possesssions by running the ball. its gonna be ugly
The Odell Bowl
mittenedman : 11/24/2022 10:43 am : link
Interesting in the comments under that Twitter link, it mentions the Cowboys just tweeted at OBJ "It's your move." This is being billed as The Odell Bowl down in DAL.

Keep Jones healthy…
wma31 : 11/24/2022 10:52 am : link
Of course winning is the focus, but this is the kind of set up where the rest of the season can get derailed by one big hit. I still think we can get some key bodies back and make a run to 10 wins. But with Jones none of that is possible.

Get the ball out quickly today and try and run Saquon (as much as Dallas will be ready like Detroit was). Hope the Cowboys make a couple of mistakes and we keep it close for a chance in the 4th quarter.

Otherwise, get a mini-bye at 7-4 and get ready for a big one vs Washington.
I expect Dallas will dominate the LOS
Rick in Dallas : 11/24/2022 10:54 am : link
On offense and defense
I really worry that they will attack our LB’s in the passing game with their RB’s
I also think Schultz will have a big game in the middle of the field as our secondary is just decimated with injuries
I think we’ll have success running.
Tuckrule : 11/24/2022 10:56 am : link
Jones has to be involved as well as breida. Need to use a lot of pre snap motion. Defensively my only concern is the edge. Can the linebackers flow and fill their run gaps. McFadden sucked last week I expect crowder and smith and we need to limit pollard.
RE: Someone on BBI compared today's game
Spider56 : 11/24/2022 10:57 am : link
In comment 15919627 M.S. said:

With respect to MS and that great song, I do like the analogy with the 7th cavalry, but maybe I’ll go with this one instead ... as Sam Elliott said in the movie, “Custer was a pussy” and Brian Daboll certainly is not.
Link - ( New Window )
Run, run, run
Dukie Dimes : 11/24/2022 11:04 am : link
Run, run, run, run, run. Limit passing to short screens. Max protect when you need a longe pass play. A bit of play action here and there. Otherwise, it’s all about the run. Up the middle, misdirection, toss sweeps, power, zone, and scrambles.

Chew up the clock. Long sustained drives. Keep defense off the field.

Thank you. The uniform schedule from August had them in blue today. I never recall this happening in Dallas.
I don't expect the game to be close or the Giants to score much
GeofromNJ : 11/24/2022 11:10 am : link
but what will irritate me is seeing Micah Parsons tormenting Daniel Jones and Kadarius Toney scoring touchdowns for KC this Sunday. Gettleman passes on Parsons, trades down and takes Toney, and now Toney is in KC and we have a compensatory third round selection. Oh, well.
The last time the Giants wore white at Dallas was 1963
truebluelarry : 11/24/2022 11:11 am : link
59 years ago.
The Giants trailed 27-14 at halftime but dominated the second half and won 34-27. 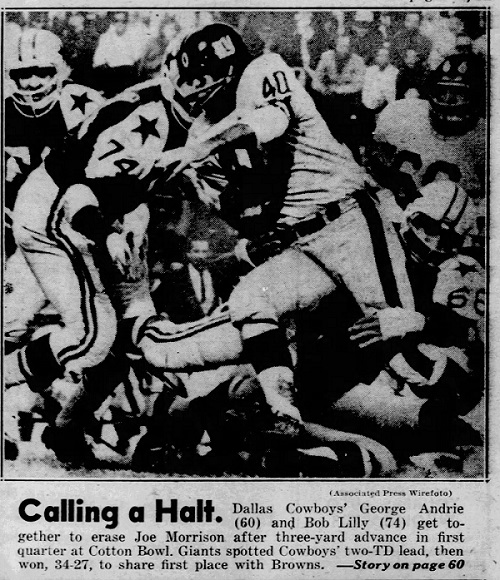 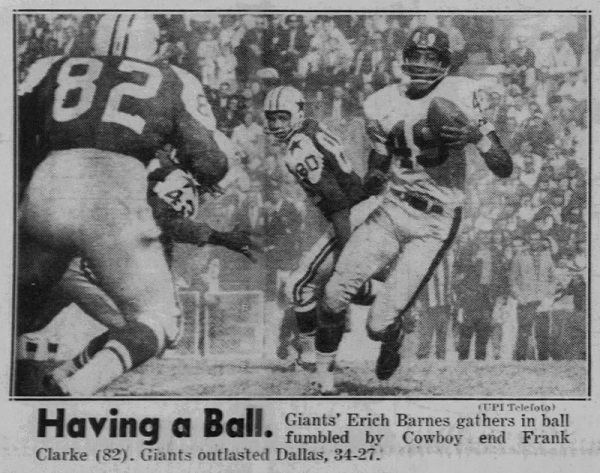 Have a great Thanksgiving, let's hope for an amazing one!

A lot of injuries, but they still have their 7 of their most valuable players in place

CB is concerning, but besides Lamb Dallas doesn’t have a major outside threat.


If he is after a championship, the he'd be nuts to sign with the Giants.

And if he were after a championship and sustainment over the next few years, KC, Buff, and San Fran are way ahead here.

Not sure what Wink will do on offense. Will the Giants stack the box, stop the run and pressure the QB and try to force turn overs or will the Giants just try to prevent the big plays and make Dallas grind it out and try to keep it close into the 4th quarter and hope Jones can pull it out.


A tough watch. A friend of mine lost an arm in that battle.
I suspect
LG in NYC : 11/24/2022 12:45 pm : link
We are going to lose early and often in this one. This is about avoiding further injuries, but I am not expecting much out of this team today against a very good Cowboys team. (It pains me to have to take that.)


The cavalry didn't head to Little Big Horn knowing they had left a third of their best troops behind or that they were massive underdogs.
RE: RE: Someone on BBI compared today's game
Blueworm : 11/24/2022 3:22 pm : link
In comment 15919882 k2tampa said:

“I know we’re really injured but…”

And now the divisional games are just starting.


I would have thought so too. But below is what I've read. But anyhow, I can't see the Giants having any shot at him unless its primarily money with little regard for championship.

"The prevailing belief is that Beckham wants a multi-year contract on a team that is both contending now and will in the future. A cold-weather city isn't a no-go, but he'd prefer warmer weather and wants a city or brand with a big platform."
Pages: 1 2 <<Prev | Show All |