Go back and look at the 2020 season when Randle would miss game winners, i defended the crap out of him because he would carry the offense..

Brunsons carries this team, the only reason they are even in this game is because of him, he got 2 good looks, they didnt fall..
.
Del Shofner : 11/27/2022 8:45 pm : link
what's our best defensive five while still having some offense?


Didnt need his offense, he could spread the floor just from his threat at 3 and is a much better defender..

Brunson had the offense in the 4th and Cam was helping out when needed..

Every month of every season we have losses or moments like this one, today where the nba sticks it up the tailpipe of Knicks fan and does it with joyful exuberance. Just fuck off already we get it we have to suffer. Guess 50 years ain’t enough.
It just amazes me that Thibs is a defensive guys
robbieballs2003 : 11/27/2022 9:04 pm : link
And we suck at D yet he refuses to use Duece. The reason Belichick is such an amazing coach is because he takes away your strengths and makes others beat you. I have no idea how Thibs can watch Morant time and time again just do whatever the fuck he wants with zero resistance. Then, reverse it. We never make him work on defense. The offensive gameplan should be to attack him at every opportunity to either get him in foul trouble or get easy buckets. It is amazing to me that Duece has played the last handful of games but now that Rose is back we couldn't use him tonight? Remember the Bulls Cs with Jordan? They'd just run out like 3 different guys and use those fouls. We should be doing that against Morant. Let Duece frustrate the shit out of him. And, if it doesn't work, then we now know. But never taking a swing pisses me off.
RE: Why is
djm : 11/27/2022 9:06 pm : link
In comment 15924574 TommyWiseau said:


Probably because he ain’t that good. I know it’s impossible to fathom, but the guy is a limited player with some flashy and fun specs until proven otherwise.


Even if you trade Randle you arent tanking, Brunson is to good and trading Randle may make this team better and more versatile
Yeah, a Brunson injury is the only route to tanking
bceagle05 : 11/27/2022 9:53 pm : link
and no one wants that, unless it’s a minor thing and they decide to shut him down and pull the plug on the season. Thunder do it all the time with SGA and others.
The move isnt to tank
nygiants16 : 11/27/2022 9:59 pm : link
the move is to identidy who fits with Brunson and who doesnt and make moves accordingly..


They also have Dallas top 10 protected..

Right now they have their own, Dallas and Wizards would convey, its not 3 lottery just 3 first round picks
They had to lead with 26 seconds left
Vanzetti : 11/28/2022 1:11 am : link
Reading the post Mortem‘s here, I would think they lost by 30.

Ja Morant is an amazing player. He made a player grabbing that rebound and putting it back in. And we all know Tibbs is the worst end game strategist perhaps in NBA history. As soon as he called the time out with 14 seconds left, I went to put dishes in the dishwasher because I knew we’re going to lose. It seems like they never score an endgame situation after a timeout with the play the tips is drawn up

The good news is Bronson continues to improve, RJ had a bounce back game, cam played well Grimes played pretty good defense. OB and Quirk have been in a funk and maybe they’re leveling off And be nothing more than complementary players. but they are both NBA caliber players who will have careers of over 10 years

Just got to stick to the plan of building from within and keep the faith that it will work.


I have no idea what Randle's value across the league is, we all hate him but who knows what the league value is..

and id rsther trade off Rose, Fournier and Randle than use IQ to trade Randle..

..
nygiants16 : 11/28/2022 9:01 am : link
This front office has a gift/reprieve with the signing of Brunson, he gives them a light at the end of the tunnel. He is a star in the making, he is doing more than anyone could of imagined, But the front office has to make the hard decision and move into the direction of making this his team.

They need to look at this roster and realize that Rose, Fournier, Randle, and even Rj dont fit next to Brunson. Move off of those players, Rj i wouldnt just give away and lets let some of these young players benefit from playing next to Brunson..

Also when the next available star becomes available freakin pounce and dont think twice. You habe a star in the making, at minimum an all star, make a move and you can vault this team pretty quickly..

Grimes and Cam are such great fits next Brunson, it sucks we can see it more
Defense is 50% of the game
shyster : 11/28/2022 9:28 am : link
and Brunson is a poor defender. He gives the Knicks an offensive element they didn't have last year, but has made a mediocre defense worse. 9-11 record is on track for 37 wins, same as last year.

Brunson is shooting only 32% from three, below his career average. His two point percentage is dead-on his career. The one thing that stands out in his stat profile is that he is taking twice as many free throws as he ever has, because he has the ball in his hands, instead of deferring to Doncic.


Brunson isnt a poor defender, can he stop other great players? no but many top players dont guard the other teams best players, thats why you have players on your team to do that..

Brunson can play on or off the ball thats ehat makes him a great player, he is effective either way, most great players do not need to habe the ball in their hands most of the game...

You also claim he is doing this because of higher usage, his usage rate is lower than Randle and Rj, not much higher than last year and also keeping the same effeciency, thats why hr is taking another leap..

Adding another stsr doesnt change that, because stars can play on or off the ball
I really don't think Brunson's a liability
Ten Ton Hammer : 11/28/2022 11:41 am : link
He plays within his physical capability and effort isn't in question.

If he's the #1 perimeter defender, then yes, it's not great. You can't play him and Fournier together. 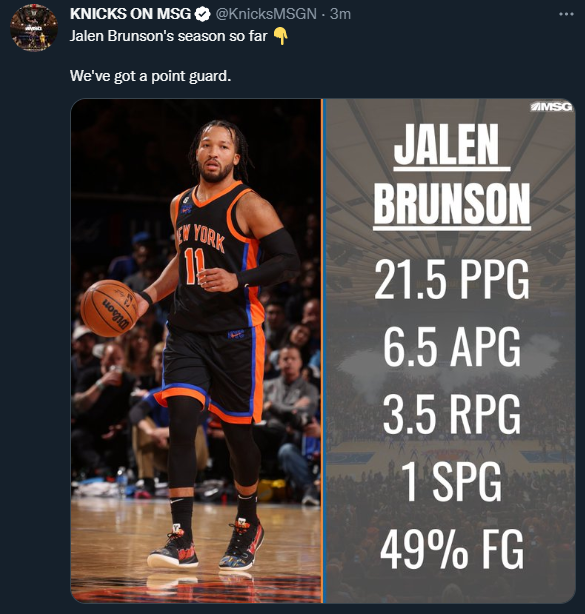 Knicks
TyreeHelmet : 11/28/2022 12:23 pm : link
I truly believe this past offseason and specifically the Mitchell trade was such a pivotal moment for this team. Imagine how you would feel if you had a backcourt of Brunson and Mitchell and avoided those contracts to Barrett and Robinson?

I said it last year but I really wished they moved Barrett before his stock started to go down. You simply cannot build around this player and he isn't equipped to be a complimentary role player.


Yea, I just cannot get behind Barrett as a long term piece. Every year the fans go back and forth on him being the center of a trade or the cornerstone of the franchise based on how he's playing that month. That tells me what I need to know. His "improvement" has been taking more shots and that's been backfiring this year so far. He's going to be hard sell as an "ascending" player, especially with that fresh contract. Good lord did we botch the Mitchell thing. I could have been OK with not getting Mitchell had we not panicked and blown on our wad on RJ and Mitch.
Pages: 1 2 <<Prev | Show All |