Looked at NFL season-to-date winning percentages as a function of the following ratios:

The most serious drawback to the above analysis is that there is a synergy between running and passing (both sides of the ball) and the correlations above do not account for that synergy. Moreover, this is just a snapshot of one season (through Week 12) and I'm too lazy right now to replicate this finding over past seasons. But for the time being, I am intrigued by the current findings.

I think people look at this wrong. It isn't about passing vs. rushing in terms of wins and losses. Both are needed. It isn't one or the other. The way it should be looked at is that points come out of the passing game and being able to control a game comes from rushing the ball. The Gianta run the ball because they know they aren't going to win in a shootout. They are running to control the game and keep it close. The Chiefs pass the shit out of the ball because they can and will take their chances in a shootout.
RE: .
M.S. : 11/29/2022 9:04 am : link
In comment 15926059 ChrisRick said:

You can't look at running in isolation (nor passing for that matter.) That's why I stated the following caveat:


Sorry, I missed that. I have seen multiple fans use this data as evidence that running the ball is not an important part of winning which I do not agree with. Your caveat is spot on. There are grey areas that numbers just can't represent.

I also agree with Robbie's point. It matters how a team's roster is constructed; what play style fits their roster best? At one point in the league, running was all teams did until coaches realized how important passing is. Since then teams have always preferred to get that great qb to be able to rely less on the run game which makes it tougher for a defense to pin you down.
RE: I'll look at this more but I am not sure if a ratio is the way to look
M.S. : 11/29/2022 9:10 am : link
In comment 15926069 robbieballs2003 said:

You are absolutely correct that it is not about running vs passing. That is why I pointed out that a flaw in this analysis is that it does not account for the synergy between the two. The way to get a handle on this would be to run a multi-variable regression analysis with both Run and Pass Ratios as inputs. Once you get the mutli-variable regression equation, you could compare the coefficients for each ratio to see which one is higher.
RE: Okay. Now I know what M.S. means ! Master of Science in mathematics
M.S. : 11/29/2022 9:11 am : link
In comment 15926056 Ivan15 said:


That makes practical sense. If you can accrue more yards and points on fewer attempts, you have the ball less.


+1
I would never knock the analysis, I have too much respect for the expertise. I just don't feel that game state, how teams script their calls and adjust based on situations can/is captured.

I'm also not sure that every team that needs to run the ball as you suggest is necessarily good at building their run game. Somebody with a lot of experience in the league recently mentioned Bill Walsh's view that building the run game was the most difficult and important task of an offensive coach. Essentially, there were times when even the model west coast offense was going to need to run the ball. I think KC would be more effective if they wanted to be.
RE: I’ve been looking at this for a while now
M.S. : 11/29/2022 10:06 am : link
In comment 15926103 giantBCP said:

I just took a quick peek at the number of passing attempts for all 32 NFL teams as it relates to winning percentage. If I understand your statement correctly, we should find a negative correlation between the two sets of data. In other words, the more times a team passes the ball, the lower its winning percentage (and vice versa.) Bottom line, I found no correlation whatsoever between the two variables.

That doesn't mean you are wrong when considering a specific game. All of us have seen games when a team is ahead and kills the clock by running instead of passing. But in the context of all 32 NFL teams through 12 weeks of the season, there is no relationship between Passing Attempts and Winning Percentage.
An addendum
JB_in_DC : 11/29/2022 10:14 am : link
Evan Lazar puts a chart on twitter every week mapping Rushing and Dropback EPA Per Play. Hasn't done one through this past week but linked below is through Week 11. Also does one for defense. Giants are in the quadrant you want to be in, imagine a lot of this is driven by their scrambling success (which contributes to dropback epa). 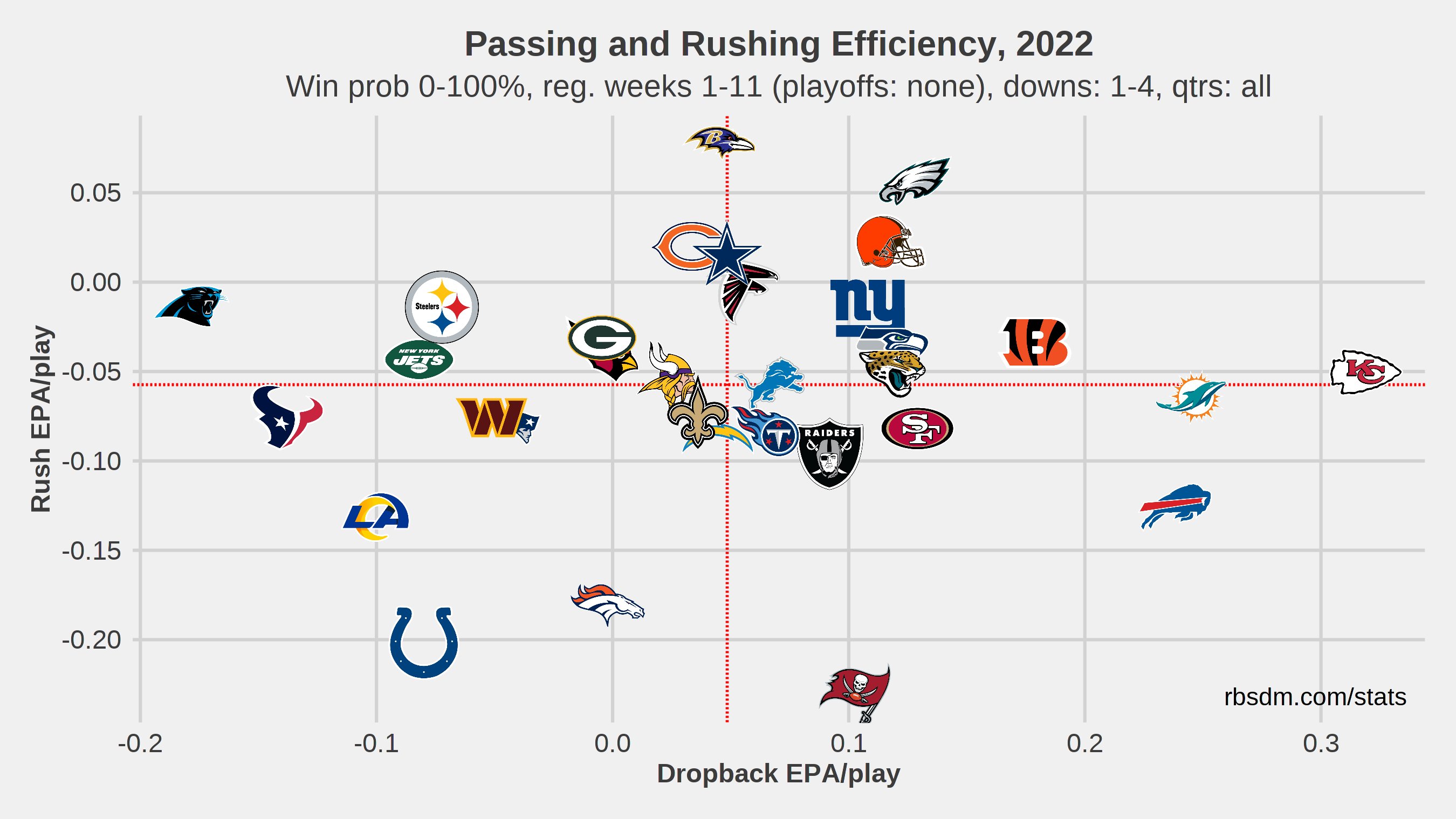 Toward the end of the game, if Team A is winning, their goal may well be to just burn as much time off the clock as possible by running the ball. (No passing.) Note that Team A doesn't really care how many yards they gain on the ground... they just want to burn the clock.

Team B is losing to Team A, and they know that -- toward the end of the game -- Team A just wants to run the ball. So, Team B loads up its defense to stop the run.

In the scenario above, the winning side (Team A) will depress their average yards per carry since they are just trying to hold onto the ball, which would also include taking a knee. The losing side (Team B) will probably enhance their defensive stat against the run since they are loading up the box knowing full well that a running play has been called.

In other words, Minny, NY & Chargers are winning at a much higher rate than one would predict based on their respective Pass and Run Ratios.
OK, so just to confuse the issue even more
M.S. : 11/29/2022 11:55 am : link
I looked at the data a slightly different way. I removed the efficiency out of the running and passing statistics. In other words, rather than looking at offensive and defensive yardage on a per carry (or per attempted pass) basis, I just looked at rushing and passing yardage on a PER GAME basis without any reference to the number of times a team ran the ball or the number of times the team passed the ball.

So, there's something for everyone. If you are looking at "efficiency yardage" -- that is yards on a per attempt basis, then passing efficiency seems to have much more predictive power of winning than running efficiency. But if you are just looking at total yardage per game, then it's about even, with rushing having slightly more predictive power.
Lies, damn lies, and statistics
gary_from_chester : 11/29/2022 12:02 pm : link
Impressive analysis, but don’t believe it’s meaningful. Context matters, and every game is different.

Taking a step back, what wins football games? Control the line of scrimmage, win the turnover battle would be my answer for the most impactful elements.

I would expect to see a huge correlation between winning and total plays versus total plays allowed? What does it all mean….honestly, probably not much. Get the horses in the trenches and the QB and the stats will be in your favor however you look at them.
Team rushing stats
Spiciest Memelord : 11/29/2022 12:31 pm : link
should be taken with a grain of salt, a QB running for yards is like a failed pass attempt in a way.
Football is inherently situational
TheEvilLurker : 11/29/2022 1:15 pm : link
A lot depends on where, when and who. For both teams. Then add in what you are good at, and what your opponent is bad at.

A regression/ correlational analysis on football stats cannot tell a coach (or his players) what they should do to play winning football.

Nor can it say which stat leads to winning football since - to quote a very old statistical saying - “correlation is not causality.”

What regression can do is plow through a mass a data to reveal underlying patterns in the data. If the pattern seems to fit everyone’s intuition, well then everything is fine. But when a data pattern does not fit pre-conceived notions, it forces us to either figure out “why” and/or modify our pre-conceived notions.
RE: Perhaps some clarification
gary_from_chester : 11/29/2022 2:10 pm : link
In comment 15926395 M.S. said:

My #1 take-away is that, while we often judge a RB by his yards per carry, the statistic on a total team-wise basis shows no pattern (and is not predictive) with winning percentage. Below is an explanation why that may be so**.


**Here's one thought on why the Run Ratio
M.S. : 11:01 am : link : reply
appears to have no correlation with winning percentage.

Toward the end of the game, if Team A is winning, their goal may well be to just burn as much time off the clock as possible by running the ball. (No passing.) Note that Team A doesn't really care how many yards they gain on the ground... they just want to burn the clock.

Team B is losing to Team A, and they know that -- toward the end of the game -- Team A just wants to run the ball. So, Team B loads up its defense to stop the run.

In the scenario above, the winning side (Team A) will depress their average yards per carry since they are just trying to hold onto the ball, which would also include taking a knee. The losing side (Team B) will probably enhance their defensive stat against the run since they are loading up the box knowing full well that a running play has been called.