Any news on OBJ?

crooza172 : 12/1/2022 11:29 pm
I’m blown away by how quiet and secretive the giants have been with this visit given the media attention it has had. While Jerry is publicly licking the Beckham lolly pop, the giants have stay mostly quiet about and we haven’t heard a peep about today other than speculation.

Has anyone seen or heard any news of the visit? I’m guessing some people don’t want him but you are a different person when you get to your 30’s and have a child. It changes your perspective and I personally would love the signing given the state of our wr Corp and the sorry group of FAs in 2023.

I am neither for this or against this but watching highlights of him.. he does something none of our receivers do... he catches with his hands.

even if he returns to 75% he raises the level of WR's here.

This might even motivate and get Kenny Golladay's head back in the game. With Slayton and the kid from Buffalo his name escapes me at the moment.. the possibility of turning this group from low performers to something that might make defenses have to play the pass too? Giving Barkley some holes...

Because in retrospect, he may have been worth the drama when you consider what our WR situation has looked like ever since.
I don’t know whether NYG sign Odell
Section331 : 12/2/2022 9:36 am : link
or not (I would guess that Dallas is the odds-on favorite), but it is refreshing to see that there are no leaks from the Giants’ camp.
He lacks the dazzling breakaway speed, but
CT Charlie : 12/2/2022 9:46 am : link
he still can run good routes, get open, and catch almost everything he touches, which is all I want from a receiver. Unfortunately, he'll want big bank.
RE: He lacks the dazzling breakaway speed, but
riceneggs : 12/2/2022 9:58 am : link
In comment 15928602 CT Charlie said:


he lacks breakaway speed? fast forward to 1:35 on these highlights and watch him blow by 2 green bay defenders.


so let me get this straight. yall hate our current WR group. we have an opportunity to improve that group this year and possible next year, if he wants a longer term deal. and you say NOPE?!!

If they sign OBJ to a multi year deal, I think Jones is staying.

If the Bills and Cowboys are really interested in him and both are legitimate contenders, someone will give him the second year--which is understandable given that they should both go for it this year. We have no business paying a second year for what should only be a rental. So, my point is if the Bills and Cowboys are interested OBJ is going to get the second year that he wants.
How do we know we are overpaying?
Jim in Forest Hills : 12/2/2022 10:10 am : link
IF they decide to make an offer lets see what that is. And the Giants will need multiple new WRs next year.
RE: Isn't this OBJ's second ACL?
Eman11 : 12/2/2022 10:12 am : link
In comment 15928613 Essex said:


I think a lot depends on how badly he wants to be here.

Pay him decent for the remainder of this year and if he wants to take an incentive based nice deal for next with some guaranteed money then I’d be creative and do it. If he’s open to that kind of deal, great. If he wants a big guarantee and is all about cashing in for next season then I’d pass.


I see this the other way, those teams are loaded at WR, younger faster players that they want to lockup. Giants have no one to keep, just players to shed. DAL/BUF just want that one year deal, they will offer the championship as the carrot. Not saying they will do it but the Giants are really the ones with the 2nd year in play.
RE: RE: RE: Isn't this OBJ's second ACL?
riceneggs : 12/2/2022 10:12 am : link
In comment 15928619 Essex said:


who's the better upgrade? there's no guarantee that we're going to get who we want in the draft. Eagles screwed us last year.

You still need a veteran WR on the roster next year.

Golladay will be gone.
Sterling Shepard may be gone.
Slayton is an unrestricted free agent, who has played well and will get some looks. I doubt he accepts peanuts from the Giants next year

The guy is a public cheerleader, who does have relationships with the players and is basically used by them to get their stories out. I doubt anyone from the Giants front office is talking to LPG!
He's less than ten months removed from a second ACL to the same knee
JonC : 12/2/2022 10:24 am : link
He's unlikely to play in 2022.

If he doesn't work out on the field, then I would strongly question anything other than a prove it deal to bring him in and see what he's got left.
RE: enough with this asshole. when he could play he wasn't worth the drama
Spiciest Memelord : 12/2/2022 10:27 am : link
In comment 15928549 Victor in CT said:


I'm not insinuating this came from the front office, but as you mention, he does have relationships with players and people in the organization. Beckham still friendly with players on the team (Shep and SB obviously), it's not out of the question that something genuine did get back to this guy.
the calculation they need to make is OBJ vs march '23 options
Eric on Li : 12/2/2022 10:36 am : link
here are your 2023 UFA wide receivers in march 2023 who have played more than 50% of snaps this year.

Jakobi Meyers and Slayton are perhaps the only appealing options on the entire list, and Meyers is probably going to get resigned in NE if i were going to guess. 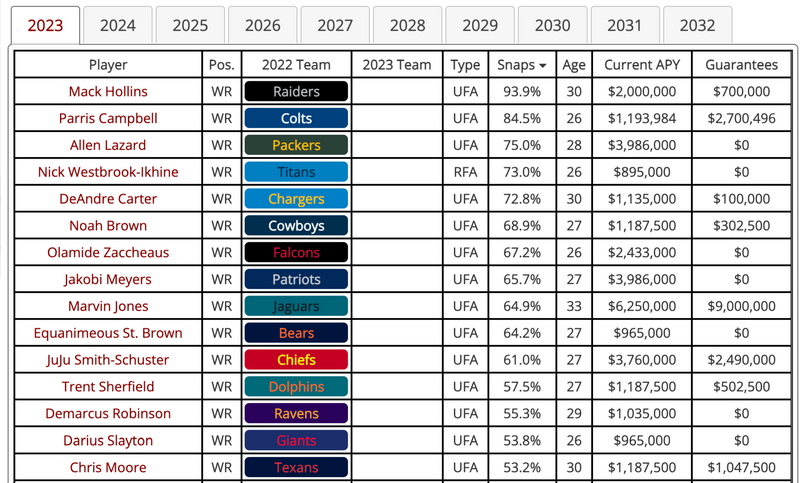 so against this criteria and if healthy signing OBJ could simply be getting a jump on building the 2023 roster - and doing so without having to give out a contract that factors in the comp pick cancellation formula.

whatever you get out of him this year, just 10 months removed from ACL surgery, is probably gravy.

also 1 other note on his ACL surgery, i believe they went in and repaired and fixed an issue from his original surgery. so while i dont think the 2016 version of OBJ is ever coming back there is a chance he's still a productive player going forward as he was for the Rams in their run last year. That player healthy would easily be WR1 of this FA class. Godwin and Gallup both came back this year off ACL injuries in under 12 months and started slow but now started rounding back into form so it's not impossible. but i wouldn't expect OBJ to have much to contribute this year until January. any action he sees in December is likely his ramp up time.
RE: Your right crooks about one thing
Dr. D : 12/2/2022 10:50 am : link
In comment 15928520 Giant John said:

I don't think ANYONE thinks he's "going to be the player he was long ago". The question is will he be better than what we have (possibly) and whether it's worth signing him (big ?). As of right now, I trust Schoen and Daboll to determine those answers.
RE: this sounds like Beckham isn't going to be a factor this year
djm : 12/2/2022 11:01 am : link
In comment 15928547 Eric from BBI said:


Anyone expecting Beckham to play at all before January if at all this year is crazy. MAYBE he plays for a team by week 17 or 18. Slightly better odds he plays in January if his new team makes it there.

I think Beckham is more than capable to mentally prep for games if he's healthy enough. He's never been known to fail at playbook knowledge. If he's physically ready he will play late in the year, but it's going to take 2-3 weeks to ramp things up. It's already week 13. He aint playing in week 14-16 there's just no way.
I read somewhere that he really won't be ready to play until
PatersonPlank : 12/2/2022 11:01 am : link
next season, and then of course we will have to see then what he looks like as a 30 yr old after two ACL injuries. He may come back and be a fine #2 WR, but for a young team like ours I'm not sure he is a fit. He'd be a better fit in a team that is a WR away (or at least thinks they are).
RE: RE: I know there are some here who are not a fan of License Plate Guy
FranknWeezer : 12/2/2022 11:02 am : link
In comment 15928645 Essex said:


Thanks for posting this.

If he is impatient and wants to sign right now, it's possible you can get him at a bargain vs what he would get if he were to just wait until after the season. If they can structure it in a way where he signs for WR2 money on a deal with 2023 guarantees with incentives beyond next year, I can get on board. Similar to how we needed to stabilize the OL with veterans like Glowinski, this WR core will be completely baren next year, you need to stabilize it somehow while you build behind it. Whether OBJ is that veteran guy and that "bargain contract" works out has a lot of volatility though. I do think it's more prudent to shop the third contract WR market instead of second contract market. I don't have any interest in throwing a ton of money at Jakobi Meyers because he's still young, bring in an older vet and build behind them, cost is baked into their age/health. Not every signing needs to be looked at as a core 5+ year guy.
From that list above
AcesUp : 12/2/2022 11:12 am : link
I can see Parris Campbell being the head turning overpay next year. I don't want the Giants to be that team.
Eric on LI
BillT : 12/2/2022 12:01 pm : link
“there is a chance he's still a productive player going forward”


No team is going to give him a 2 year, 40 million fully guaranteed contract. Not sure why people think that

He'll get some guaranteed money and he'll have incentives built in.

Well that’s interesting speculation but we’re still talking guaranteed money on some level (and I didn’t say 2y/40m). For me 0 guaranteed money sound about right for what we know about his condition which is also 0.
RE: Enough already
kickoff : 12/2/2022 1:16 pm : link
In comment 15928542 jc in c-ville said:


It’s been reported that he’s been cleared to play. Now that may be smoke from his doctors, but the Giants could structure a multi-year deal that is only guaranteed if he is available to play in x number of remaining games.

Either way, the Giants have to make any deal on their terms. If Odell doesn’t agree, than move on.
If OBJ wants to play for NYG
xtian : 12/2/2022 2:07 pm : link
then great, though I would be very surprised if he did. He would certainly upgrade out WR position. I have confidence that Schoen will not overpay.
RE: We desperately need receiver help
Payasdaddy : 12/2/2022 2:10 pm : link
In comment 15928584 JoeyBigBlue said:

He wouldnt be coming here if he had no interest
Money and timing with where we are as a team my not align but if he has matured he may think he has some unfinished business here
OBJ isn't going to upset anything
djm : 12/2/2022 2:24 pm : link
my god some of you give a player way too much power or influence. OBJ might get hurt again. But that's the worst case scenario here. He isn't going to walk into the locker room and ruin anything.
RE: OBJ isn't going to upset anything
Jim in Tampa : 12/2/2022 2:32 pm : link
In comment 15928932 djm said:

I would even go as far to say that other than OBJ's Eli comment in his interview, he was a big-time positive influence in the locker room.

His teammates loved how hard OBJ played and how much he wanted to win.


He was traded because he didn't want to be in NY at the time. Do you not remember the Josina interview?


I thought you meant the kicking net stuff and boat trip