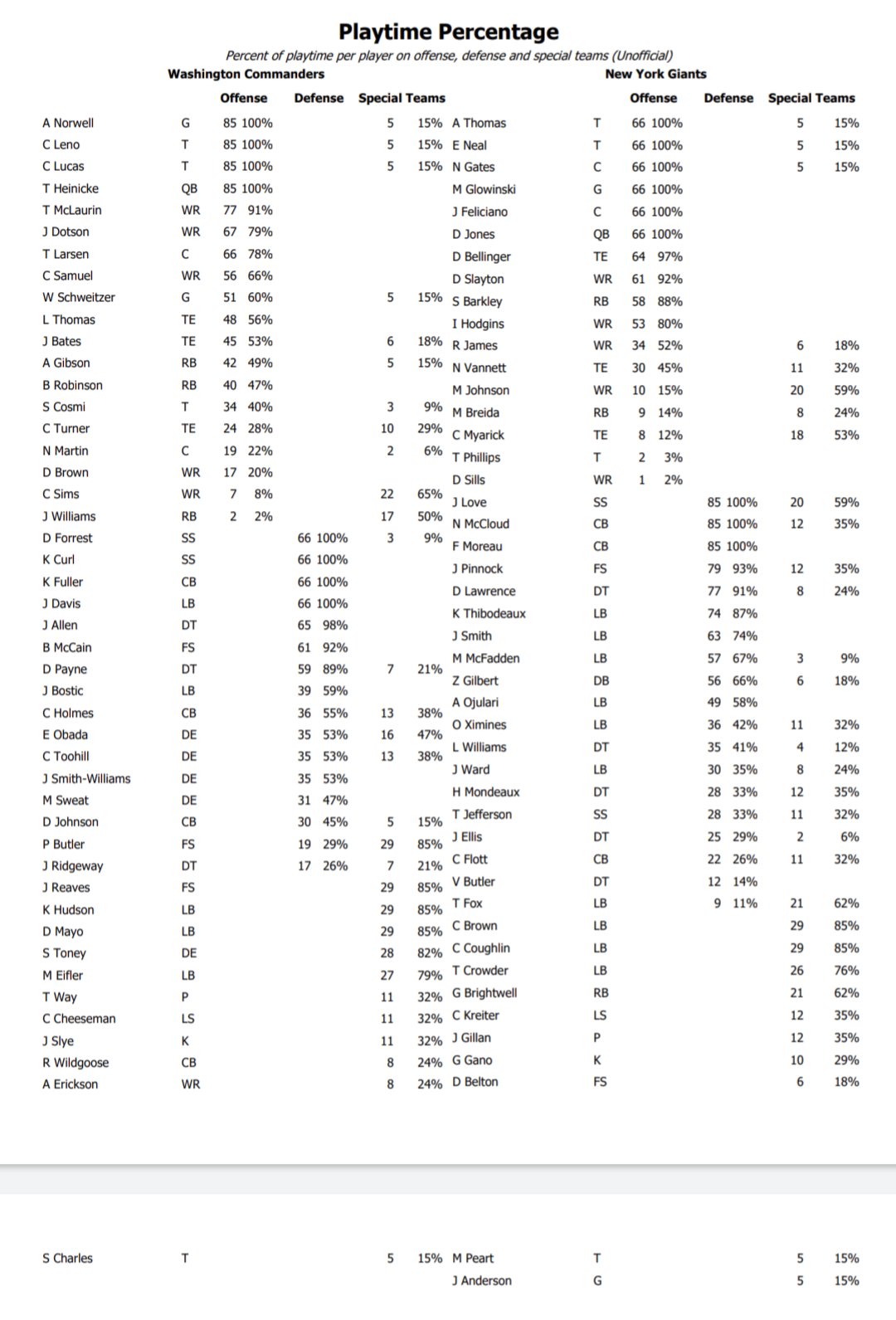 ...
Eric from BBI : Admin : 12/5/2022 9:50 am : link
Ryan Dunleavy
@rydunleavy
·
1h
#Giants Nick McCloud played all 85 defensive snaps at CB2. Ojulari played 49 (guessing that exceeded his pitch count). Undrafted rookie Zyon Gilbert in the slot over draft pick Cor’Dale Flott. Dexter Lawrence is a workhorse
Rodarius Williams
regulator : 12/5/2022 9:52 am : link
in the doghouse? Interesting utilization given how often the defense was on the field.
...
Eric from BBI : Admin : 12/5/2022 9:52 am : link
Dan Duggan
@DDuggan21
·
1h
Giants offensive snap counts from yesterday: No easing Bellinger back in. Only snaps he missed were the 4-WR package on Saquon’s TD and one play with Tyre Phillips as a jumbo TE. Giants went TE heavy. Vannett/James snaps show the even split between 11 and 12/13 personnel…

Huge workloads for Slayton and Hodgins. No reason to give any of their snaps to Golladay when he’s back. Only one snap with Saquon and Breida on the field together. No snaps for Brightwell after providing a spark vs. Dallas. 🤔

Giants defensive snap counts from yesterday: McCloud played every snap at CB2. Coverage seemed fine but the tackle attempt on Dotson’s TD was rough. Pinnock clearly ahead of Belton. McKinney is eligible to return this week (will ask Daboll for an update later)….

Gilbert elevated from PS and into a big role as Holmes’ replacement in slot. Heinicke went after him on the 90-yard TD drive. Giants played a lot of a 7-DB package with Gilbert, Flott and Jefferson as the extra DBs. Also went with 1 DL and 3 OLB in that package.

Ojulari mostly played on passing downs but a pretty big workload because he was in the DB-heavy package. Impact he makes jumps out. Leonard Williams left in the third quarter with a neck injury. Had been limited all week with a neck.


Came in with neck injury and apparently re-aggravated it.
Another Neck injury
Bob in Vt : 12/5/2022 11:12 am : link
I cannot remember a year with so many neck injuries.